Monty Python's The Meaning of Life
for PC (Windows) 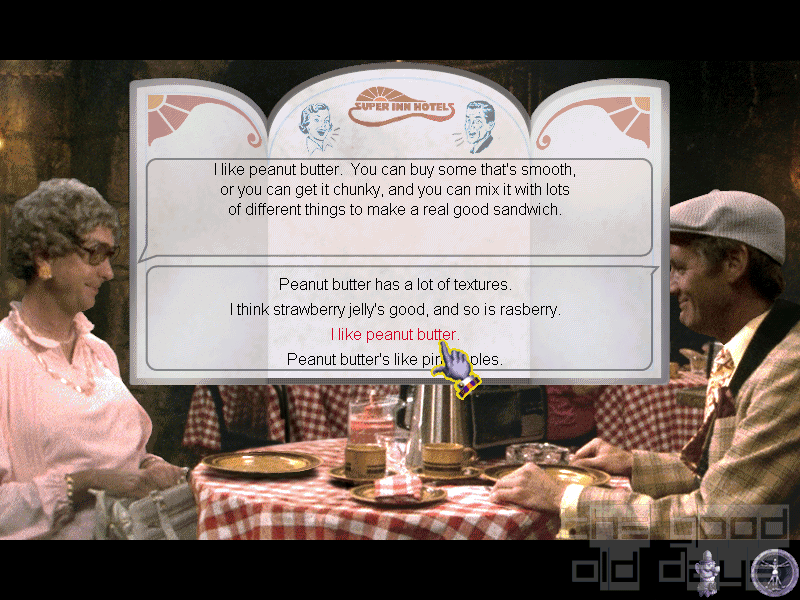 It's funny that Life of Brian, by far the most popular and successful Monty Python film, never got turned into a game. Complete Waste of Time may have been the software equivalent of Flying Circus and The Holy Grail was obviously the film of the same name, which was immediately followed by The Meaning of Life. Another 'game' oddity in a similar fashion as its predecessors.

Initially, the film's scenic structure is followed fairly closely: we follow life's inherent ridiculousness through the seven stages of man (including the colourfully titled 'fighting each other'). Still backdrops are taken from the film and the player is basically supposed to re-enact some of the well-known scenes. Clicking on highlighted hotspots will trigger silly occurences, which may or may not be entertaining depending on the player's previous level of exposure to Monty Python. Progress-related interaction, on the other hand, is mostly completely simplistic: those who remember the original film dialogue just need to click on the next person to say something. Failing that, simply clicking everywhere is sure to keep things moving.

After that, the game isn't yet won, however. Unexpectedly, three planes of existence (material, spiritual and dental) have to be waded through (looking suspiciously similar). And even after that, there are still a visit to Terry Gilliam's studio/attic/shed and numerous bugs standing in your way of learning life's ultimate secret.

It could be said that these extra 'levels' attempt to be a bit more playful. Like in regular adventure games, objects can be picked up and used in (in-) appropriate fashion. Different interconnected locations need to be search and re-visited. Of course, in all the places, there is silliness to be found.

Unfortunately, the more the makers actually tried to turn the game into a real adventure, the more obvious the flaws in the game design become. The endless skipping between locations, each time interrupted by a 'moral philosophy' question (which may be giggleworthy at first, but soon turn into a chore), the tedious search for hotspots, the almost random effects the usage of objects may or may not have…

As in The Holy Grail, small puzzle games interrupt/spice up the game flow. Problem is that like in the other game, there really is little purpose to them in the given context and none of them are original creations, but rather old hats. Hell, there is even an annoyingly annoying maze full of hidden passages which have to be blasted open first!

Now, of course, everybody will shout: You, using this nickname, how dare you criticise the first noteworthy original Python material after 15 years of silence? It is true, all the remaining Pythons at the time are listed as contributors to the game design and they did indeed all contribute wholly original speech bits at least. So listen. I've given this long and careful thoughts… and it has to be medical experiments!

Seriously. There are a couple of giggles and smirks here and there in this new material, but there really is nothing which made me, a huge Python fan, laugh out loud – apart from the goat sex thing, maybe (fortunately, I was playing with headphones on). For such a level of 'ok' humor, the joke density would need to be increased drastically – we're spending way too long period with nothing happening. A couple of sound bits and clips from the film (and the series) are of course appreciated, but in this interlaced style, I will pick a DVD over this game for this fix any day. And by the time you finally come to the studio, you, too, will realise that this is a game which, in its attempt to provide a longer play time, simply overstays its welcome.

Mr Creosote:
That at least fits into the picture of the game being fun is basically only true on a meta level.
Herr M.:
Originally posted by Mr Creosote at 02:21 on December 21st, 2017:
Originally posted by Herr M. at 11:26 on December 20th, 2017:
-) I love that moral dilemma questions! Just textbook examples for how stupid those normally are.
My issue with these is that they finally discourage free exploration of the game world. The more you move around, the more you are obstructed by those ultimately pointless questions. So actually they punish you for playing without a walkthrough.
Yes, but in a way they were quite ahead of their time: Just take any random game from today with at least a bit of storytelling and chances are high that you will get such "dilemmas" with similarly pointless results.

Mr Creosote:
Originally posted by Herr M. at 11:26 on December 20th, 2017:
-) I love that moral dilemma questions! Just textbook examples for how stupid those normally are.
My issue with these is that they finally discourage free exploration of the game world. The more you move around, the more you are obstructed by those ultimately pointless questions. So actually they punish you for playing without a walkthrough.
Herr M.:

Well, I eventually switched to a virtual machine too, because I just want to play my games in full screen mode.

Some further impressions:
-) The choppy character movement was kind of irritating at first, but come to think of it, it really suits the show. Just think of all those Terry Gilliam sections!
-) It might get a bit tedious after a while, but at least at the beginning it is fun clicking at random things and discovering pure weirdness (Oh fishy fishy…).
-) I love that moral dilemma questions! Just textbook examples for how stupid those normally are.
-) That Live Organ Transplant section… wow, don't know what to say. Seems really dark to me, cannot imagine that this would pass any kind of censorship today.

But it reminded me of a game that left quite an impression: "Life and Death". Now that is one I have to dig up sometime and review.

I think I last played it in a Windows 98 virtual machine.

Let us know how far you get - but save often, it becomes gradually more unstable.

Since I am currently rewatching the series I am a bit curious about the game, but I cannot seem to get it started. What setup did you use? Wine starts the game and plays a bit of music, but shows absolutely nothing, Windows does not even want to start the installer (just complains about needing "at least" Windows NT4.0) and I don't want to setup a virtual machine until there is no other option.

Edit: Got it working by emulating a virtual desktop with 640x480 ratio in wine. Wow… what a strange game. Especially those cardboard cutout characters. 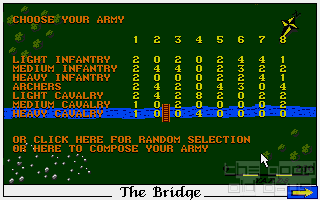