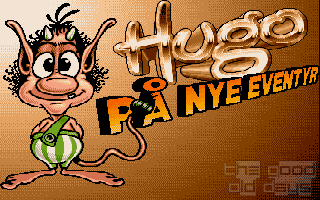 Do you recognize him? Why, it's Hugo the TV Troll from the 90's television game show! Now watch him jump off your TV screen and get inside your computer! Synopsis so far: your wife and kids have been kidnapped by the evil sorceress Scylla (Hexana in german version) and guess what, now you have to rescue them. Only it will cost you a risky journey where you will have to use your utmost discretion, reaction, but thankfully little brain, cause thinking is not Hugo's best faculty.

I still recall watching that show in my own very language, but strangely there was not even English version for PC or any other platform for that matter. Danish, German, Finnish, Swedish etc, just not English. For those of you who aren't at all familiar with Hugo franchise - it began as an interactive arcade TV game show for kids produced by danish company ITE (Interactive Television Entertainment), you could phone the studio and play the game via phone buttons while still being able to talk to the host. I can only sympathize with the unfortunate rotary dial phone owners.

The graphics and audio of the game are fabulous. The game atmosphere may give off some kiddie vibes but you shouldn't underestimate it, for it's not exactly as trivial as it seems. There are 5 levels in total which are like 5 different mini-games taking you to different environments and situations. The controls are often reduced to either left and right or up and down depending on the level's setting. It's mostly about navigating, avoiding traps and collecting moneybags in-betweens while the general propulsion is continuous and automatic whether you are driving, flying or simply walking. Your primary and only required skill: good reaction.

There are some humorous animated gimmicks here, particularly when you lose. Sometimes Hugo can stare back at you and say something funny, which made this game hilarious. Only it's not the case with PC or Amiga versions, cause you can't understand a word unless you speak one of the earlier indicated languages. Seriously, why didn't they make AT LEAST an english localization? I thought it's in your best commercial interest to make your product as much available for the rest of the world as possible, let alone it was an international project to begin with and this TV show was aired in 40 countries. So how is this different with computers? Enigmatic.

Thankfully enough, your bad danish or whatever other language not on the list will not affect the gameplay, cause the situation is pretty much clear.

Moebius:
I only remember the buttons wouldn't always work

Mr Creosote:
Quote:
I can only sympathize with the unfortunate rotary dial phone owners.
Not only that – at the time in Germany, many phone connections (even with non-rotary phones) would still use pulse dialling, but you needed touch tone to participate in this show (and similar ones). Even if you fulfilled these requirements, however, the reliability was notoriously bad. 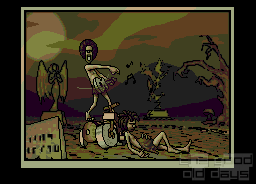