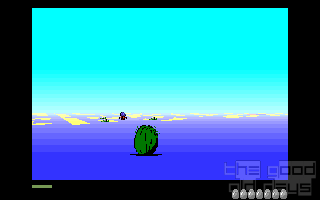 Sometimes, when I really think about it, it frightens me how old all these games I have sitting on my shelf are. Then I wonder where all this time went. It almost seems like it was yesterday, after all! But then, there are also those situations when it becomes painfully obvious that it wasn't. Case in point: Archipelagos. Our user state_trooper reviewed this and sent in screenshots. I edited the text, processed everything and put it on the site. Routine work in auto-pilot mode, no brain involved. Only a couple of days later, I actually realized that I have the game sitting on my shelf, in a nice box! So basically, what happened was that I found a game I already own by chance on the site. Seems like my memory isn't perfect, after all.

So let's refresh it. Archipelagos is a fairly abstract game, likely inspired by The Sentinel. In speckled three-dimensional landscapes, you are floating just above the ground, moving more or less at will over land and water. The goal is to “disinfect” each level. For this purpose, you first have to destroy all the rocks and finally the ever-present obelisk. Both actions are as simple as a single mouse click, so easy, right? Of course, it isn't.

First of all, rocks can only be destroyed if they stand on a square which has a land connection to the obelisk. So you may have to build some bridges first. For this, you need energy, which you gain either from shattering rocks or collecting small pods. Just be careful that your carefully constructed bridge isn't just destroyed again by one of those floating eyes (“necromancers” according to the manual). Who, of course, are not the only type of enemy. Primarily, there are strange trees moving from one square to another infecting the ground. You cannot stand on or travel to infected tiles. You may also use your energy to disinfect such tiles again, but it's a finite resource. Weather phenomena such as thunder and storm start appearing in later levels as well, and there is really no way to counter them…

These dangers always keep you on your toes. The basic task would indeed be easy but for them. All of it put together, it becomes quite a thrilling challenge: easy to grasp and pick up, but hard to execute due to time pressure and ever-changing surroundings. This is not a deep game, but a quick thinker's one. Maybe not quite up there with The Sentinel and definitely not as groundbreaking anymore, but nevertheless still fresh & fun.

state_trooper:
Feel free to share anything about Archipelagos (1989) here!
[Reply] 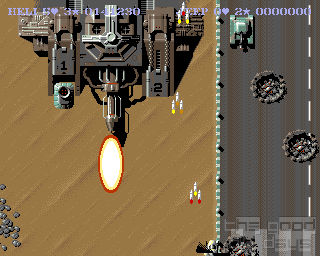