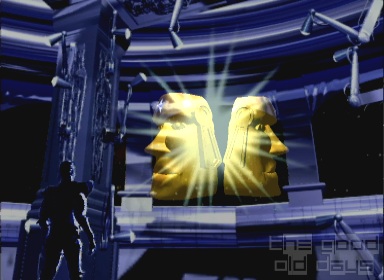 Planet Kether, a dying world. An evil force which goes by the name of Khork gains stronger and stronger influence. His latest coup has been the kidnapping of Princess Eta Carene. The Emperor of Light (another disembodied mystic force) tasks the Cosmic Knight Melkhor to free her and overcome his adversary. To gain entry into Khork's space ship, Melkhor first needs to visit four temples (Malkhut, Hod, Hokhmah, Gevurah) and retrieve insights…

Gameplay is divided into three parts. First, trips through space where Melkhor has to dodge obstacles (both stationary and moving). Second, there are small logic puzzles, all of which should be well known already: Memory, Master Mind, Simon… Third there are mazes shown in first-person perspective.

…and never forget to brush your teeth!

None of the three are particularly impressive. The puzzles are all old hats. The mazes use the classic step-wise, angled movement schema and the controls are a little oversensitive. Often, you will overshoot and walk past the corridor you wanted to take. Hardly ideal if an enemy is nearby ready to jump you. The space flight sequences are probably the most fun of the lot. Being stylish graphically, they are unfortunately only pre-rendered films played back and overlayed with the player's ship sprite (live rendering of such three-dimensional models would have been impossible at the time). This comes at the cost of not actually having real freedom of movement and it's virtually impossible to predict where something closing in on you will actually end up on the screen.

Both the latter and the movement issues in the mazes are at least made up for by generous amounts of life energy with many opportunities to recharge. (In this context: unfortunately, at the time of writing, there was an issue with showing both the life energy and lives overlay playing on an emulator, so you don't actually know what you have left. The game was nevertheless finishable – check the hints section.) 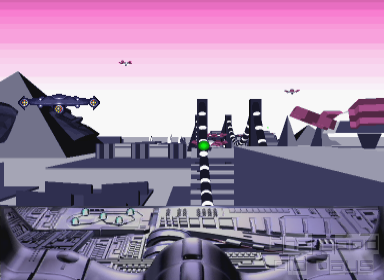 What sold me on this game isn't so much the serviceable gameplay, which is reasonably entertaining, but hardly spectacular. Rather, Kether is a very well produced game. Voice acting, in all four languages is a highlight – it is excellent in English or Dutch and still good in German and French. Gameplay (which itself is accompanied by a good soundtrack) is frequently interrupted by small cut scenes of either the Emperor giving some cryptic piece of advice, Khork taunting you or a message from Eta Carene being received.

Today, we have Wikipedia, so it is easy to figure out by the names used that this space opera is only a front for something which indeed represents less of an extroverted fight, but rather an introspective, symbolic struggle towards spiritual enlightenment, and I guess I'm not spoiling much when I say the motifs after the final twist reminded me of The Neverending Story. Overall, the plot is of course minimal and especially the interjections of the Emperor of course don't have any real philosophical depth (basically, all he says comes down to “you make your own destiny”). But at least they built up this impressive smoke screen around nothing and listening to these competent voice actors who do their best to ham things up is pure delight!

So there. Now feel free to make fun of me for falling for style over substance. It is true that this is not an amazing game if you look at the hard facts. Nevertheless, it's a very good entertainment product and that is what Philips was going for with the CD-i (which it didn't actually market as a dedicated game console for much of its life), wasn't it? The key to enjoyment of this one: don't overthink, don't question things! Once you start asking yourself why Melkhor flies straight through the asteroid field when to all sides there is nothing but open space, things start falling apart very quickly…

Mr Creosote:
Hence my pointer towards Wikipedia in the review

Don't expect too much, please. There is really nothing behind the smoke screen.
Moebius:
Did you know that Kether, Malkuth, Hod etc are the kabbalistic sephiroth / emanations signifying hidden forces upholding the universe? Kether is supposed to be the very first and most refined one which is a divine spark that produced all the lower emanations down to Malkuth which is our physical reality. Never played the game, but i'm curious how well these correlate with the setting.
[Reply] 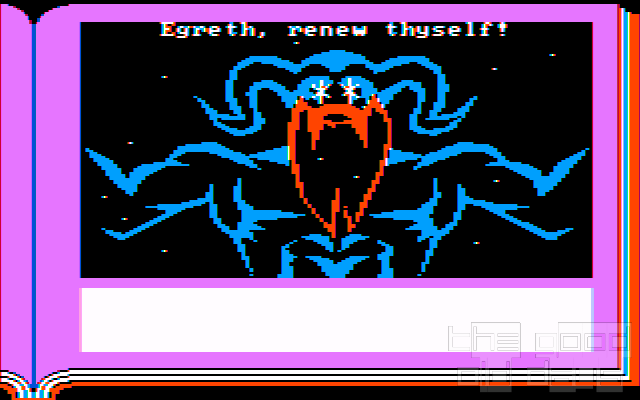