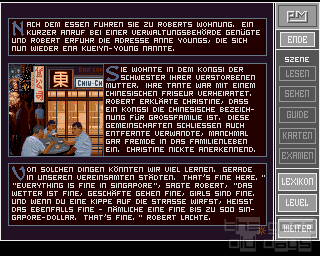 Singapore, Lion City. This is where the trail leads when a Japanese business man and former general of the royal army is murdered by a prostitute in London. Investigative journalists Christine and Robert smell a story, and the game's plot follows them. However, the player takes over the role of Taiko, member of a Japanese secret society, who apparently supports the two in some way.

Which strikes right at the core of the plot's issues. The player does not take the role of the protagonist; others are in the driver's seat. Even worse, half of the time, the player is presented with scenes in which Taiko is not present and about which he couldn't possibly know. Even in those situations where he is present, Taiko remains a passive spectator. Which all leads to one suspicion: Taiko, as player avatar, has only been retrospectively introduced into an already finished story.

Which once again shows that it is a really bad idea to first write a "static" story, even more so one with an omniscient narrator, and then throw in some kind of player character later, if you want to sell a game. This constellation comes at the expense of numerous consequences which cannot really be taken care of retrospectively anymore.

This should already make it more or less clear how much the plot and the player in front of the screen are connected. Like in the predecessor, you will simply read what's happening anyway. This results in a narrative which is consistent and even a little stronger this time. Further detailed descriptions of characters of things can be called up with the click of the mouse. The interface has even become a little cleaner still.

Though when it comes to influencing the story, which already wasn't the strong suite before, options have been reduced even further. Every couple of pictures, you will get to make a choice. Sometimes, these deal with pure knowledge questions, quizzing whether you've read the preceeding text carefully or whether you own the original manual. And then, there are sometimes "real" decisions which action should be taken next. Not that they will ever lead to any branching. Ideally, they simply continue the plot; at worst, they will make you fail instantly; in between, an error counter will be increased which, reaching a certain threshold, will trigger failure as well. So it is hardly different than in Holiday Maker, where most options were also just part of a pseudo-interactive smoke-screen, but Stadt der Löwen actually makes it explicit.

At least, you can now save your progress, but music is still completely absent. The illustrations accompanying the texts have actually improved another bit. Together with the subjectively slightly superior plot (roughly of the adventurous kind of Tintin, but also on the same level of cliché), the result is a similar game on the quality level. Nothing groundbreaking, but also nowhere near despicable. At least if you don't insist on actually taking part in the outcome of the story.