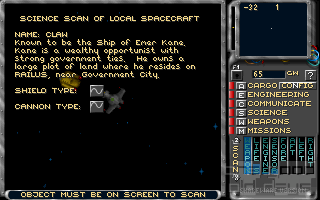 Solar Winds is primarily a top-down 2D shooter against a classic sci-fi backdrop published by Epic MegaGames (the forerunner to the modern Epic Games) in 1992. The game is split into two episodes where the first was disrupted freely as shareware and the second was available through mail order to users who paid the registration fee.

The two episodes are essentially standalone games which install to separate directories and are capable of being run without the presence of the other at all. This is despite the fact that both are obviously based on the same identical game engine. For both, the core gameplay mechanic is to fly a single occupant space ship, resembling a fighter jet in both appearance and function around a pretty huge (but also pretty empty) 2D plane representing a region of space containing multiple planets and star systems. Both friendly and hostile ships are encountered which are AI controlled and may attack the player and in most cases can be attacked using a variety of expendable and non-expendable weapons. This provides the major action gameplay aspect for both episodes.

The general layout of the interface, which puts the player's ship in a big window on the left side plus engineering and weapon data on the right side, always reminded me of the Starflight series and there is some gameplay commonality here but Solar Winds doesn't have the exploration depth among other aspects nor the planet landing module that Starflight does. Combat isn't too difficult but it's generally challenging enough to not become immediately boring and later trying to defeat enemies more efficiently without using expendable missiles or loosing hit points (energy) can provide some replay value.

Beyond simple space combat the game also provides a somewhat elaborate ship-to-ship communications engine where animated portraits are displayed along with text of the dialog with NPC ships and their crews. This often includes lists of multiple possible responses which can be given to each statement or query made by the AI player. This is all heavily scripted and linear and these conversations serve as the major driver of the game's plot along with some animated cut scenes. There's also a simple inventory system of items which can be picked up and sometimes used which also helps drive the plot or ensure that quests are completed in the correct sequence.

The first episode, called The Escape, is actually pretty engaging and a lot of fun to play. It strikes a good balance between the various and limited capabilities of the game engine to vary the mode of play throughout the episode so that it's not simply combat-all-the-time. Although the game is pretty much entirely linear, the action portions of the episode are interspersed with mild free-form exploration through a single star system and later the neighboring star system. The star system contains a lot of planets and other objects which can be scanned for more information and this adds some depth and helps reveal the backstory. This along with the plot details which unfold as play progresses helps tantalize the player and gives it keep-playing-to-see-what-happens-next quality. This continues all the way to end of the episode which then uses it as the selling point to register the game and receive a copy of the second episode which promises more of the same and concludes the story line.

The second episode, called Galaxy, was very disappointing. As promised, the second game world was much larger than the first one but it lacks all the charming polish and little details that made me love the first episode and want to register it. Also gone is the almost addicting trickle of new plot tidbits that drove the entire first episode. Instead, the second episode can be pretty much described in terms of go-here, blow-this-up, go-over-there, blow-that-up, hey-look-you-won. Given the steep cost of the registration fee and the dramatic drop off in content quality I was left feeling sort of conned. Clearly, a lot of effort went into building the engine and designing both episodes (the graphics and sounds are generally quite good across the board) so I want to give the developer the benefit-of-the-doubt but it's hard to shake the feeling that little effort was put into the second episodes because they knew that they had gotten their money by that point so why keep feeding the player the good stuff?