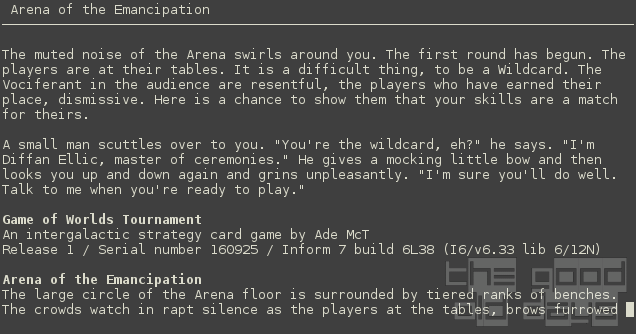 I've never been into trading card games, as I believe they are a total commercial rip-off. Buy to win. After playing this one, I see the strategic appeal, however. The player takes part as a wild card participant in an intergalactic tournament. Nobody would bet a dime on him. Round by round, he challenges opponents and with that, the status quo of the ruling society (or something…).

Each card played has a specific effects and the effects add up per turn. Some harming your opponent, some boosting yourself – until you finally (hopefully) gain the upper hand to certain victory.

The art of designing such a game lies in balancing the cards. A single all-too-powerful effect will destroy the game's balance completely. During reasonable play time, there were none such to be found. The effects are varied and colourful, leading to all sorts of interesting situations when combined so that no two games are alike (or, let's say it's quite unlikely). So, job very well done!

However, a big however, however, Game of Worlds Tournament suffers quite a bit, because it clearly falls into the area of medium abuse. The parser format is really not intended for this sort of thing. Seeing the cards graphically, maybe having a side bar showing currently active effects and a point & click interface (or even just a text interface providing one hotkey per card) would serve such a concept much better than repeatedly typing X CARDS, X SPECIFIC CARD, X ANOTHER CARD, PLAY CARD and END TURN.

Which could be forgivable if the format were used in some other way. No such luck, however. The opening shows it all too clearly: the player is given a game manual in-game which he has to study in-game. I.e. READ SECTION 1, READ SECTION 2 etc. The right way of using the medium would have been teaching the game rules interactively instead of dumping the information on the player as a wall of text.

So although there is quite a bit of fun to be had with this game, it's not a winner, because the real stengths of its medium have not been used.