Color the Truth
for Interpreter (Glulx) 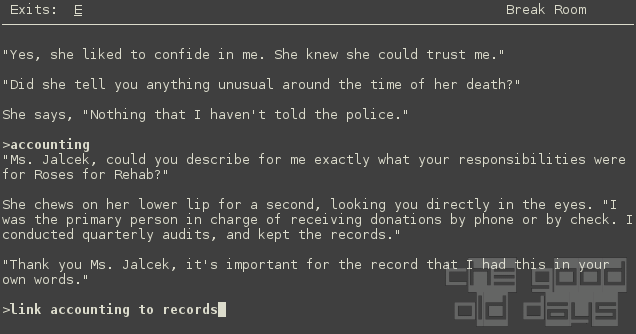 Rosalita is being blackmailed, having embezzled some money from her own charity. Two days later, the aging radio station owner and show host is murdered in her own office. Her secretary saw the murderer: a very likely disguised man with a stubble. The investigation team already sweeped the place. Now it's up to the player to interview the four main suspects – the beneficiaries named in the victim's will, i.e. her sister (a flamboyant wannabe show star), her ex-husband (also her former colleague who went to the competition recently), her business partner and the secretary.

It may seem strange that the game begins with a prologue played from the blackmailer's (and very likely murderer's) point of view. However, this design is actually quite clever: the opening scene gives the player a first hint concerning the motive and, more importantly, it introduces the central game mechanic with a simple example.

Deduction games often fall into the trap of the actual thinking (i.e. the real game) being made outside the game itself. They dump information on their players and they then are supposed to draw conclusions, but that process usually not modelled in-game. There are only few imaginable mechanics simulating this process. Color the Truth uses the one first introduced to the genre in Discworld Noir: pieces of information and inquiry topics are handled like inventory items which can be applied and combined with each other to come to new points. I.e. when you find a contradiction between two statements, for example, you can combine the two and then confront the people who made the conflicting statements.

A second speciality is that you can actually “play” the statements made by the suspects. I.e. the statements are not just dumped on the player, either, but rather told interactively. Always bearing in mind that what they're telling may not be the complete truth. Which means that once you catch them lying, you may actually be able to re-play their statements in a different version. Shades of the genre classic Spider and Web…

In addition to its engaging and carefully designed plot and characters and its excellent implementation which makes the game microcosm come alive, what makes Color the Truth an excellent game is its usage of the medium: it performs both its core points, taking the statements and making deductions, in an interactive way. This is exactly what distinguishes successful interactive fiction from failed attempts.

Mr Creosote:
Feel free to share anything about Color the Truth (2016) here!
[Reply] 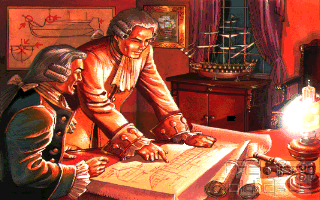