Darkiss! Wrath of the Vampire - Chapter 2: Journey to Hell
for Interpreter (Z-Code) 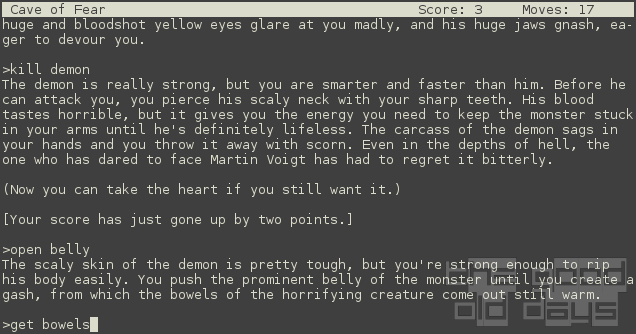 I quite enjoyed the first part of this “saga” last year, so I was looking forward to this one. And then, the competition randomiser put it right at the bottom. Nevertheless, I made it! Anyway, there seems to be a jump in narrative compared to where the first one ended. There, vampire Martin Voigt had only just escaped his tomb. Now, he's already well on his way to fulfil his plans for world domination.

This episode deals with him going down to a Divine Comedy type hell to meet three powerful witches who can grant him additional powers. On his way, he meets demons and other creatures, some of whom he has to defeat and some he needs to ally with. Also, some characters from the first part make another appearance.

The puzzles revolve around usage of special vampire powers; specifically, the abilities to turn yourself into a bat, a wolf or fog and to hypnotise people. Also, the game keeps reminding you of frequent “implicit” uses of heightened strength, improved vision etc.

The setting is not quite as tight as the previous one's, leading to some aimless stumbling around in the middle section. The end game even has two or three instances of pretty obscure actions being necessary, one of which almost reminded me of the 1980s trope of digging on every screen just to see if there is anything hidden.

The writing transports an appropriate amount of misanthropy, arrogance and ruthlessness for such a protagonist. This is actually the game's main draw as it is indeed fun to play a character who is unapologetically “evil” for once.

The series' storytelling approach actually has to be applauded. Both games so far did a good job of having their own arc, including some closure at each respective ending, while still advancing a global plot. All too often, “episodic” games tend to forget one of the two. So even if gameplay is a little shaky at times, it's worth following.

Mr Creosote:
Feel free to share anything about Darkiss! Wrath of the Vampire - Chapter 2: Journey to Hell (2016) here!
[Reply] 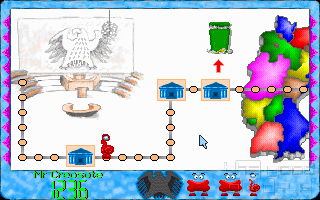