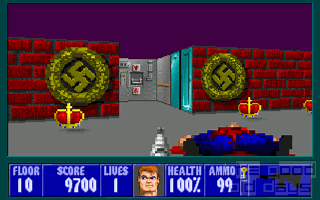 The level layout is as simple as imaginable. Because the third dimension is only faked on the slow machines, you stay with your feet on the ground at all times, without jumping over any obstacles, holes or even abysses. John Carmack may as well have made a bumper car or hovercraft simulation. Though a beautiful nazi castle with appropriate insignia on the walls, played through the eyes of an escaping prisoner of Polish descent has something more mysterious and is more likely to be discussed in underground circles than some childish stuff.

So, knife in hand and pistol or rifle ready, we're moving across the flat corridors of the huge prison, connected by elevators, and encounter attacks from identical-looking, German-shouting soldiers and guard dogs, in front of the backdrop of nazi crosses and portraits of the “Fuehrer”. If that should not be enough, you can also shoot nazi mutants in later episodes.

You feel right at home in the role of punching the brown evildoers in the face and drop your moral concerns quite soon. The intuitive gameplay does the rest to motivate making it to the next level and to forgive the almost identically-looking places, which you'll frantically search for ammunition, golden art treasures and numerous secret passages leading to well-hidden extra lives. Soon you'll have pixel blood running everywhere, develop your own tactics to fight the limited enemy AI more efficiently and become greedy, destructive machine of death, which may even recognise one's evil boss or the snoring roommate as final boss instead of the “Fuehrer”.

Though that wasn't even the real reason why this game was banned in Germany very quickly. The unconstitutional symbols used in-game was not considered appropriate for hopeful youths growing up in a liberal democracy, and it was considered to play into the hands of certain fringe groups. However, responsible people as the guardians and teachers of all the victims of this game certainly were will never be tempted by such a cruel, merciless and primitive massacre among human beings for fun and pastime and so they will also not waste even a single look at the new, irresistable, almost photo-realistic Wolfenstein: The New Order.

Though the international success of the title and the development of this concept to this day put yesterday's player in the right in retrospect and almost oblige him not to demonise the game, but rather to see it as a stroke of genius which started a new era in computer gaming. The increasing demands towards processing power from this kind of software kickstarted the always increasing cycle of faster and faster hardware development. This wouldn't have happened if the lazy gaming nerd had done something healthy for a change, packed his paintball gun and had had real fights with his friends under the clear sky. That, at least, would have turned us into real men. 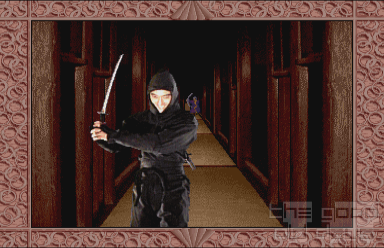