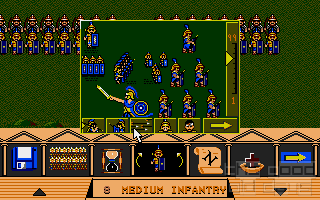 Cohort II, even sharing the original's subtitle, has to be the laziest sequel in the history of the computer games industry. Why? It is virtually identical with its predecessor.

Let's have a look at what changed. Apart from the new title screen (Wow!), that is. Two languages the game previously spoke are not supported anymore (feature regression…). There are some new battlefield types, one of which (“marsh”) is effectively the same as “bridge” combined with “hills” and the rest (“downs”, “undergrowth” and “forest”) plays just like the previously available “hills” as well. Of course, none of these new battlefields look any good graphically. 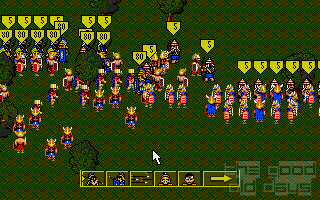 The interface now allows a third command mode on top of giving orders to individual figures and units: commanding the whole army at once. Useful at the beginning of the battle. Last, and maybe least (though it's hard to tell with such meager choices), there is a new army type: barbarians. I.e. Romans can still fight against other Romans, but also against those “savages”. Which at least introduces some graphical variety (even if it makes absolutely no difference for gameplay).

So you could ask why this game exists. The reason is fairly simple, and believe it or not, there is actually a valid reason. The reason is called Caesar. That surprisingly fun game added a “province” (i.e. macro) level to its Sim City core. From time to time, barbarians would attack the Roman settlement. Cohort II offers to load a saved game or install itself “inside” Caesar – so that the player can actually command those battles, instead of just having them calculated. 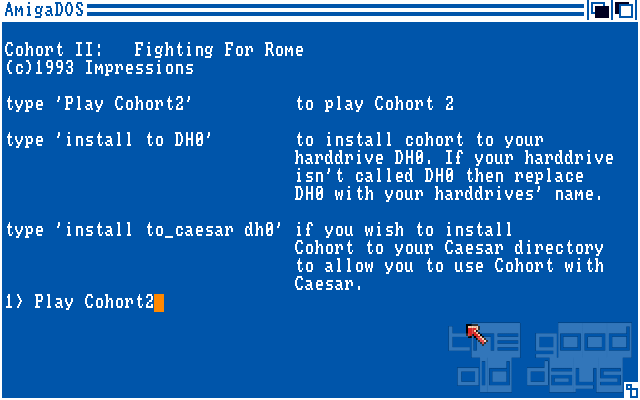 Install? Play? Neither sounds good to me.

Which, if you think about it in abstract terms, is an amazing idea! It makes the Caesar/Cohort combination one of the forerunners of what became the standard in the genre later on (Impressions themselves used the combination – to much better success – in Lords of the Realm). It gives actual purpose to the formerly completely pointless battles when Cohort is played standalone.

Problem is, no idea – as great as it may sound on paper – can do without a decent execution. Coupling it with Cohort II does not enhance Caesar; rather, this one drags the other game down. It's much more fun to play Caesar without this “enhancement”! 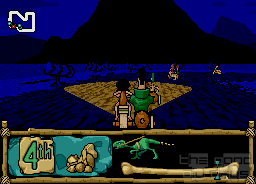