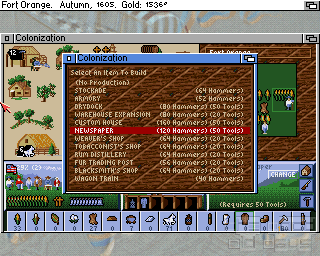 At the end of its commercial life, the Amiga had some strange releases. As the viability of ports decreased, but wasn't yet completely absurd, the key was often to cut costs. Ports came late, if at all, and often hadn't been subject to sufficient quality control. Colonization was ported two years after its initial release by Microprose's UK branch. It doesn't do completely horribly, but also shows the typical signs.

It seems the route they took was writing a wrapper to display pre-made screens in an OS-friendly manner, i.e. within the default windowing system. So Colonization finds itself deeply within the controversy around how much immersion into a game world is possible if it looks like a Workbench application. The free placement of component windows is rather pointless, as there are only few sensible arrangements (i.e. one). Some things have not been consistently straightened out; e.g. sometimes, you will need to close child windows with the button on top left, but sometimes, there are buttons/options within the window as well. Apart from the immersion aspect, there are no major disadvantages at least. 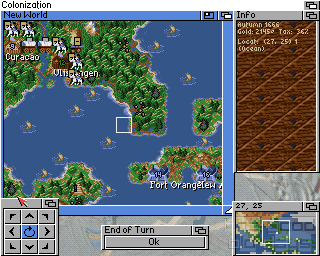 The game, however, is plagued by the same issue which already haunted the Amiga port of Civilization: mouse clicks are not registered reliably and in general, everything feels rather sluggish, from screen redraw to general responsiveness – interestingly enough, regardless of how powerful the host system is. A couple of bugs known from the original have been fixed (such as the infamous "u" one), but others not (transport routes still don't work reliably) and occasionally, new ones pop up (whom to take along from Europe). The loss of colour depth causes some issues of intuitive recognition. For example, it's a bit hard to tell trained soldiers apart from untrained ones. Missing animations and cut scenes (the comedy king is absent) are not much of an issue, but not displaying the surrounding tiles in the city screen has serious repercussions on resource planning.

So it should be clear that if you want to play Colonization, this is not the ideal version to play; rather, we should see it as a historical oddity: on a system where virtually all games used custom self-booting floppy formats to bypass the operating system completely, we suddenly got a game which was the polar opposite in this respect.

Putting all technical aspects aside, Colonization of course remains a fascinating game. Its focus on economical development and logistics set it apart from the bulk of the war-focused strategy games. Which comes at a cost. That being that the worldview transported through this game is an extremely American one: the absolute primacy of capitalist economy above everything.

Given the (theoretical) subject of emancipation and attaining freedom, settlements could have been centres of humanity; the player could be tasked to build a social, peaceful utopia. Instead, cities are nothing but production centres. Whether they are spaces to live well or not is apparently of no relevance – or the designers actually equate Protestant core values ("work hard") with that. Or, much more generalized, the game has a very narrow worldview and offers virtually no alternatives to its player. The only way from start to finish is to build up a strong economy, rebel against the motherland and resolve this conflict with military means. 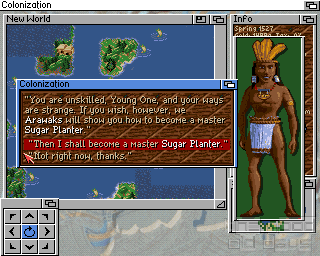 There are some facets of the way there, on the other hand, are quite interesting; in particular, there are the three potential enemies.

First, there are the natives. It's axiomatically atypical to face an opponent who doesn't start out the same way you do. The native tribes begin at the height of their power, and as the European's strength grows, theirs dwindles. They take at least a triple role of being potential trading partner, education centre and military opponents – often all at the same time, because the state of war and peace with them is not binary, but rather gradual.

Second, there are the other Europeans. They come closest to opponents like they are known from games like Civilization. What is special is that beating them is not necessary for a human player to win. It's not even necessary to be more powerful (by whatever definition) than them. Actually, it is possible that three out of the four protagonists all win the game! Appropriately, the other Europeans act aggressively towards the player, but not necessarily in an outright war-like way.

This is because the winning condition is only gaining independence from the European motherland. Who is the third opponent, and in a way, the most mysterious one. Initially, there is no way to survive without it. However, right from the start, the European royalty is portrayed as pompous and basically evil. They raise taxes for no apparent reasons. They demand extra payments for necessary survival support. They bring their wars to the new world.

However, their real power remains unseen throughout most of the game. There is no way to resist their judgements in significant ways. From time to time, there are news that their army just got stronger again. Even accepting the premise of a military resolution without alternative, there is no way to sail to Europe and fight the conflict there. It is an extrinsic, almost godlike force; a sword of damocles hanging above the player's head – in spite of the buffoon-ish behaviour of the king.

It is not clear whether these opponent types have been distinguished the way they are intentionally by the designers. Some aspects indicate that at least, these ideas have not been fully developed, not used to their full potential.

For example, take the role of the other Europeans in the new world, potentially the already indepent "New World" states and the natives during the war of independence. There is none. Or at least no relevant one. Units of other (Ex-) Europeans are simply removed from the board. Natives could, in theory, take arms against the player as allies of the evil king, but in practice, this will not be a danger anymore at this stage of the game.

It's even worse the other way around. A war of independence for the competing Europeans controlled by the artificial intelligence doesn't even exist. They are simply "set free" by their respective rulers without further ado at a certain point in time.

Both limits illustrate the large untapped potential, areas where the game could have really played out the conceptual strengths of having such very different forces within the game world. As much fun as it is the way it is – this is a game which really could benefit for a "reimagination".

Mr Creosote (2017-11-04):
The game is obviously based on North American history much more than the rest of the world…
NullVoid (2017-11-04):
I lost a good many hours to this one, which is something of a cross between Civilization and Sim City. Even though we were always incensed that the Portuguese had been written out of history; Sid Meier's Pirates! roots were showing...
Mr Creosote (2016-12-11):
Quote:
At the end of its commercial life, the Amiga had some strange releases. As the viability of ports decreased, but wasn't yet completely absurd, the key was often to cut costs. Ports came late, if at all, and often hadn't been subject to sufficient quality control. Colonization was ported two years after its initial release by Microprose's UK branch. It doesn't do completely horribly, but also shows the typical signs.

Well, wasn't Bartolomé de las Casas one of the "founding fathers" you could get? He was the dominican fray who wrote against indian slavery in spanish colonies. Even if officially there where no slaves. Slavery was forbidden, actually, so there was the cacique system, which was basically the same thing.

But the main problem I see on the game is that it's too USA centric in all the design. And the spanish bonus being against the indians apart from not too useful is very stereotypical.

By the way, being from Europe, I have actually never heard of this alleged controversy.
Rogue (2011-05-24):

Colonization was maybe the only strategy game to create a great deal of political controversy, especially in Europe. Many politically correct people were disturbed by the fact that the game has completely ignored the issue of slavery. This is also rumored to be the reason why a sequel was never produced.

The simplicity of the game is one of it's strong points, not having to worry a lot about technologies, but about developing the cities. It's a great game, but in what comes to the historical part, it's too centered on the united states, all the factions are the United States with another name, which even contradicts their history.

Mr Creosote (2000-12-12):
Quote:
Once upon a time, Sid Meier along with some other people created really innovative and fresh games. But then Civilization came! Even though it was (is!) a great game, it had one negative effect on the gaming industry: It made Sid Meier & company reusing the basic idea again and again.