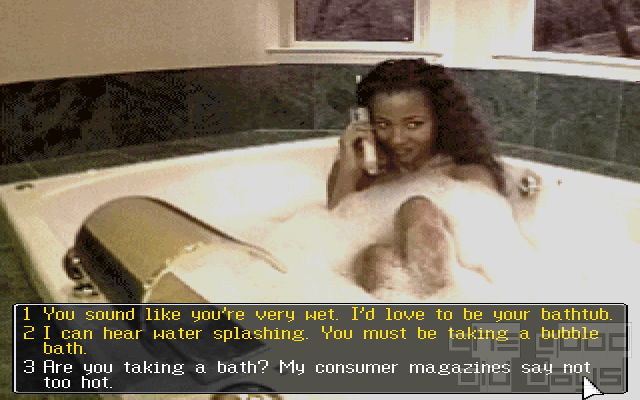 It's strange how total humiliation of men is commonly considered a comedic subject. In Two and a Half Men, this spanned a whole 262 episodes, with great popular success! Man Enough could be considered the computer game equivalent. It doesn't last quite as long, but in turn, the humiliation is all the more direct as there is no Jon Cryer taking the constant abuse as audience stand-in.

The “game” itself is not really much to write about. It fully consists of multiple choice “conversations” with various women whom the player is trying to “score” with. With each woman, the basic structure is the same: a first encounter at the gym, then a phone call and then an evening date. These encounters go really strangely; the player chooses one of three lines to say next. Usually, they are all stupid. One will usually end the encounter straight away. One will bore the women. One will make the player progress. Fortunately, the women have no memory, so after failure, the scene can just be restarted, and since the women explicitly answer each line with either “that was good”, “that was bad” or “yawn…”, it is easy to do better next time.

Not only is this a really stupid way to simulate a date: imagine a real whole evening of a guy just uttering bad pick-up lines, crude double-entendres and the like, with the woman playing a purely passive role. Boy would that evening stretch! So Man Enough fails in any case. But I actually did sit through it (“playing” would be an inappropriate term) and another thing dawned on me (the things I do for this website…).

Adding insult to injury, the game expects a strong masochist streak of its player. You see (“spoilers” ahead), the plot has a good friend telling the player about a dating agency which he should try. Indeed, the player then can take his pick from five eligible women – and even the attractive agency owner hints she may be interested after the player has shown his skills with these five clients. But really, the whole thing turns out to be a set-up in which that “friend” and the six women let the player hope and dream with each of them, only to turn him down under bizarre circumstances in the very last moment before clothes are dropped to the floor. Secretly recording what the player did, what he said etc. for later “amusement” (i.e. mocking).

Now, this can hardly be considered a harmless prank. If a “friend” did this sort of thing to me, it certainly would be the end of that friendship; my self-esteem shattered beyond repair. In one scene, one of the women in the game actually flat out tells the player she's performing a study of “the behaviour sexually frustrated men”, cracking all sorts of jokes. All this is played for cheap laughs.

However, think about it, who will play a game called Man Enough, whose sole promise lies in (semi) high-resolution pictures of young women in their underwear posing for the camera (full motion video scenes remain rare, short and small)? Right, it's exactly that group of sexually frustrated men. So the game is making fun of its own audience's malaise. There is no avatar on-screen, no Jon Cryer, providing an excuse to only be an observer who is not personally involved. The communication goes straight to the player, hitting him hard where it really hurts.

But social conventions work in strange ways, and so it is not just considered acceptable, but chic to make fun of such people… as long as they are of the male gender. In the same vein as sexual molestation of men is still considered suitable material for lazy comedy (case in point in the sitcom world: The IT Crowd). Sigh… we still have a long way to go if we want discrimination to end and finally reach true gender equality… 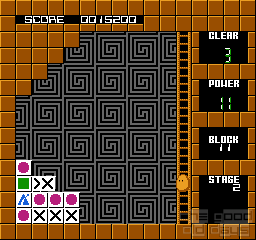