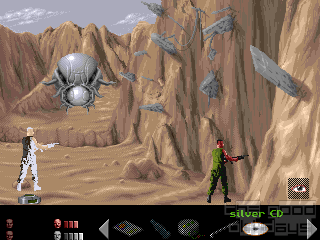 Weird, inconsistent capitalization in the title and an introductory clip straight from World's Most Amateurish Home Videos (some Eastern European guys in ill-fitting suits posting as “FBI”) – this does not set hopes high. The plot about some alien kid wreaking havoc in some backwoods part of the earth and a commando unit being sent to dispatch him – acceptable. The design goal was apparently to make a sort of Arnold Schwarzenegger 1980s action film in Adventure format. Why not, sounds fairly novel. 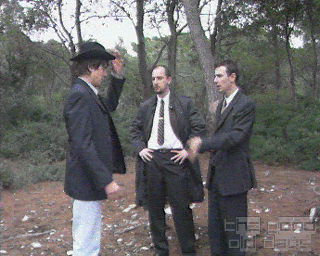 In a major change from the intro, the in-game graphics actually look good. Digitized character sprites moving smoothly have been well integrated into pretty, drawn backgrounds. The control scheme raises some eyebrows: instead of obvious usage of a mouse, the game uses a combination of joystick movement and some keyboard keys to trigger certain actions. While this works well for movement, and the actions are automatically selected depending on vicinity context in an intelligent way, it hinders discoverability of relevant objects in the scenery.

Puzzles mainly revolve around the use semi-futuristic technology to open paths towards new screens. Interestingly enough, there are even some non-hostile characters, some of whom seem to be oblivious concerning the alien threat. Though the interactions are also limited to obliging them in some way so that they open more doors for you (figuratively speaking).

Hostile encounters, on the other hand, are much more frequent. Green humanoids are rushing the player with machine guns frequently. Once the energy bar is depleted, it's… not game over. The game's other specialty is that there are actually four identical (cloned?) protagonists which the player can freely switch between. What's weird here is that three will always be “frozen” and in that state, their energy is being recharged. To make matters even stranger, the four share one single inventory. I.e. picking something up with one will make it immediately available to all the others. This makes absolutely no sense, of course, but it does save the player a lot of running back and forth. 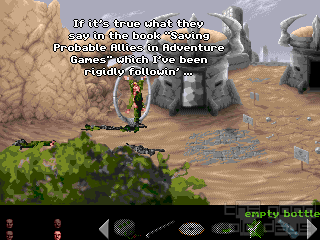 So far, so good. Hell Squad is actually quite playable, as the action is pretty fair and the puzzles are also on the leightweight side. In fact, the game is quite short overall, probably owing to its bumpy release history: after being dropped by its original publisher, another one picked it up later, but obviously didn't want to invest much to get it out.

What really breaks the game's back is its tone. Coming back to the beginning of the review, the “quirky” intro was not the downpoint. That one could even be considered somewhat charming. What's really killing the atmosphere and ultimately the fun is the attempt at “coolness” which the protagonists all exhibit (using identical lines, of course, them all being the same person and sharing the same mind). The lines the game puts into “your” mouth are nothing short of cringeworthy and their tone is all over the place, ranging from expressions of horror to fourth-wall breaking quips – sometimes one following the other directly.

Even an “action movie” needs at least some basic quality level of writing. If you think you can look beyond that, feel free to try. But don't say I didn't warn you! 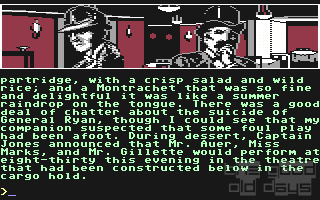