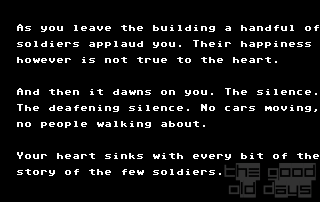 Just one more package to deliver before going home. Thankfully, the receptionist takes it. Phew, just down the elevator again… woah, what was that? An explosion? Everything goes black. Some time later, you wake up again, in the middle of some signs of destruction. Nobody's there anymore. What has happened and how to get out of there? 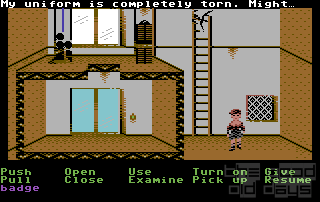 Walking through abandoned offices and laboratories, why not? It's an established theme which has worked well a couple of times. The pulpy style, on the other hand, is definitely a question of taste. First chance she gets, the top-heavy protagonist gratuitously sheds most of her clothes. Walking, her sprite is “appropriately” animated. And the plot, concerning a super lethal virus, definitely is on the trashy side. All of which may be enjoyable to some, but maybe not to everybody.

What's strange and a little unfortunate in this respect is that some opportunities to go all the way with this have been missed. For example, the receptionist is considered “cute” by the protagonist, but the “use” or “turn on” verbs cannot be applied to him.

Which is to say that the implementation is quite focused on the intended solution. Almost every other action is simply met with a “this doesn't work”. This is mostly acceptable, though definitely an area of possible improvement.

Puzzles are fairly logical, but also not too imaginative. Many will just centre around finding ways to open pathways (coloured keys etc.). What slows the player down a little is the fact that the game world isn't nearly as compact as expected. By the standards of a freeware C64 game, the game map is positively sprawling. Which means that there will be a number of things to try always when a solution isn't immediately apparent. 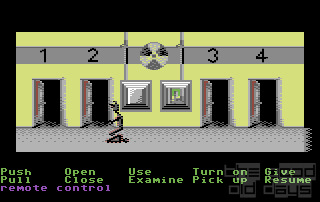 Some of the puzzles suffer a little from Adventure game logic, i.e. forcing the player to do things in an almost ridiculously roundabout way. For example, you'll be hunting high and low for a hose – although fire extinguishers are clearly visible absolutely everywhere (though they cannot be interacted with). The final puzzle, which has you locating some urine, is a little strange as well. You'd think that being human, producing some urine shouldn't be a big deal. Alas, no way to perform the obvious action in-game. Even worse, the final solution is in USE B WITH A style, but USE A WITH B will not work – and not even give any indication that you may be on the right track.

Such details aside, the game flows pretty well, supported by the good interface. The player controls the protagonist directly with the joystick. Pressing the button enters the verb/object menu. To interact with something in the room, you have to stand close to it. This makes it necessary to actually walk around the whole room to search it as opposed to the typical way of using a cursor.

The graphics make this a non-issue, however. Objects are clearly discernible and recognizable. Many rooms are drawn well, some seem a little empty, but generally, the game's look is pleasant. The only small quibble here is that the player's spatial memory is put to a test. Usually, you'd think that leaving one room to the right, you would appear on the next one's left hand side. This game has the bad habit of reversing directions, sometimes by exactly 180° – which means if you keep one direction pressed too long, you may walk right back to where you started from.

Now, I've been listing a lot of minor complaints. This should not deter you from seeing the big picture, however. Awakening is an entertaining game with some really nice ideas (e.g. the robot section). Its size and length exceed the expectations easily and apart from one or two times, you will certainly not run into even minor frustration. It's a tasty snack for one or two afternoons. 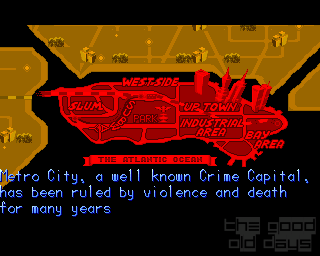