Caren and the Tangled Tentacles
for C64 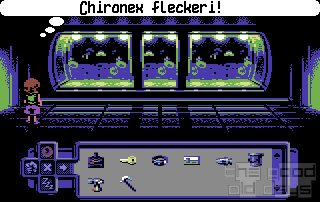 On a normal workday, research chemist Caren discovers a headless human body in one of the biologists' tanks. Who does it belong to? What has happened? And why does anybody make a new Adventure game on the C64 in 2015? At least the last question is easy to answer: because they can! 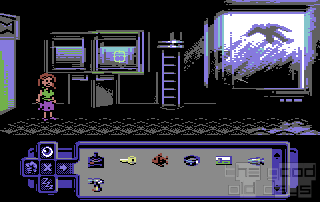 Inspired by early Lucasfilm Adventures, Caren offers a very slick game experience. You move a cursor around the screen with a joystick. A simple button press will make Caren go there (if possible). Keeping the button pressed for a second or so (configurable) will open an action menu, from where you can either examine or handle (“use”) something or combine it with an inventory object.

This interface, also allowing for shortcuts like double-clicking on an exit to warp there, is quite efficient – even more so than the classic SCUMM interface. It is, however, not without its limitations. Re-examining inventory items, for example, is impossible. So if you don't remember what some icon represents, bad luck. Also, the engine simply does not allow the combination of two inventory items.

Though, of course, the game is designed with the latter limitation in mind, i.e. you will never need this function. This has some implications on the puzzles. They are quite logical, but also fairly straightforward and easy. The protagonist will even strongly hint at what's to do next in a couple of places. Probably understandable in the context of today's more casually interested audience. 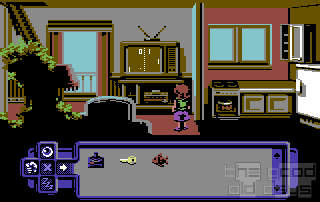 Of course, it also means that Caren doesn't last very long. In fact, it even ends on strange note, giving it an unfinished feel. Although you will find out the victim's identity and the modus operandi of the murder, the killer's motivation and identity will remain unsolved. A little disappointing. It is also quite strange that Caren never tells anyone about finding the headless body.

Technically, the game is top notch by C64 standards. The music adapts to the scene in a fluid way. The graphics are quite detailed, colourful and attractive. Some technical shenanigans work as entertaining jokes. For example, you can play Pong on the protagonist's television set and the slightly one-sided “conversation” with the office's receptionist running in the background is reminiscient of Grim Fandango. On a more practical side, the game language can be switched at any time between German and English.

It is very apparent how much effort and love went into this game. Save for length, Caren and the Tangled Tentacles easily measures up to the best genre classics. It doesn't just work as homage to those, but also is a great game on its own right. Following its popularity, a slightly extended version (one more room) has even been marketed commercially in physical format, with a full packaging. A deserved success!

In-game, the A-like logo is between the two words.

MasterLee:
Now i am quite confused is the name PriorArt or Prior Art? First one is used on pouet. But last one is used in the title of the youtube video on there homepage.
Mr Creosote:
Feel free to share anything about Caren and the Tangled Tentacles (2015) here!
[Reply] 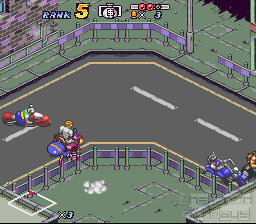