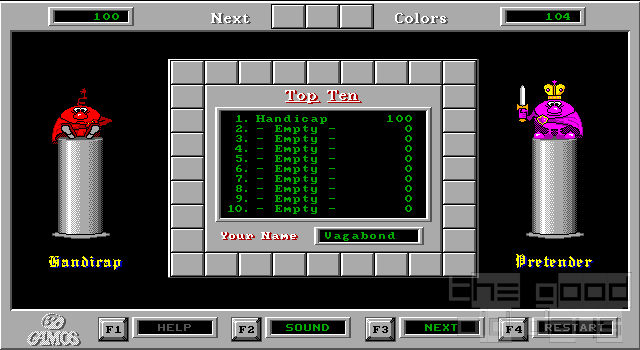 Color Lines is a turn-based board game released by russian company Gamos Ltd, which is one of the four games in Gamos puzzle series and is the most known of all. I first saw it as a kid somewhere in 1995 and immediately began to hate it, because thinking was never my virtue. It is curious that the programming part was conducted entirely by a woman (Olga Demina) and the lovely EGA graphics by male duo Igor Ivkin and Gennady Denisov. The game was quite popular amid other 90's office games and was invariably sheltered on every PC user's hard drive or a floppy disk.

Here you have a 9x9 squares grid where balls of seven different colors appear randomly in threes and your task is to re-align them to form horizontal, vertical or diagonal rows of five or more balls of the same color to make the entire line dissappear to clear up space and get points. Each of your turns brings more balls on the grid (except when you complete a line) which begin to gradually obstruct your progress and compel you to tend to several lines at a time. You lose if the entire space is filled with balls. Surprised?

There are two pedestals on each side of the grid with red character on one and purple on another. The red character is the king representing the top score player (there can be your name). The purple one is a contender (you) and takes the lowest position. During the game you have to collect enough points to topple the king and take his crown which is how you beat the game record, but, alas, not the game itself. From that point on you can keep playing it forever and setting the world's most impossible top record.

Now, that last thing is something I could never swallow. Why play a game if there is no real end? To infinitely collect points and make others jelly? Definitely not my kind of fun. Also, I think this game suits ladies more than guys, as I only ever saw it being played by women (no wonder the programmer is a female!). Lastly, I think the best way to enjoy this game is to be a chick yourself, play it on a single office computer by turns, and when your shift is over and you call it a day watch this other lady walk in, start the game and go bitchcakes over the new top score set by guess who. Wheeee!!!

Monterrojo:
This is the silliest review I've read about this game. The Color Linez game is not a never ending game accumulating points forever. It actually has a few algorithms that make the three balls appearing not random and actually making it really hard to achieve certain marks. When you get to 4'000 points in this, let me know. Fool.
Moebius:
Feel free to share anything about Color Lines (1992) here!
[Reply] 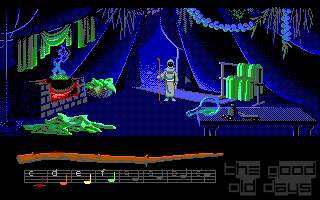