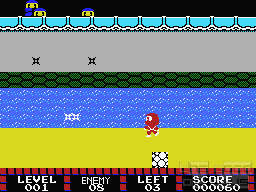 Has it ever occured to you that the way of a true ninja can be a tough row to hoe? Especially if all you can do is throwing shurikens. One, two, five, dozen shurikens, all in all a heavy task when you are attacked by myriads of other ninja who do exactly the same thing. Now, are you tough enough to take on them all? Will you survive in this vicious battle?

Ninja Kage is one of the very first computer games I played as a kid some 22 years ago, as well as the very first one to get an ultra turbulent rise out of me, which ultimately resulted in a broken spacebar. No kidding. Though, today I honestly can't tell why, because this game is endless and finishing one level alone would suffice which is fairly easy. The game is an arcade scrolling shooter and is originally an MSX port only, however I played a bootleg on a different machine.

The protagonist is an Iga ninja called Kage (shadow) who must clean this fort of evil Kouga ninja from yard to the very rooftop. Your weapon is ninja stars or shurikens which you shoot up from below while Kouga shoot down from above. The game has 3 differently arranged stages. On each stage you must destroy a certain amount of Kouga ninja to get access to the next area. As a matter of help there are these magic scrolls which sometimes appear in a puff of smoke and enhance your shuriken power in a variety of ways. Temporarily, though.

The 1st stage features fort surroundings with a ditch blocking your way where Kouga attack you from the top of the fence. Incidentally, this is the only stage using scrolling on walk (looped background), while others are static. When you have killed enough Kouga ninja the gate opens and you are admitted inside the fort, which is where stage 2 begins. There you continue shooting down Kouga ninja in a weird room with three sliding doors on top. Finally, stage 3 takes you up on the roof, which is where you complete a level.

I can't say this game is very impressive and particularly enjoyable, but driving me nuts it did very well, so I suppose it deserves a little tribute. Besides, this is how it all began for me. Memories, memories... 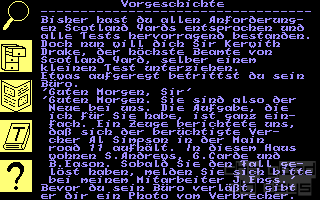