Eric and the Floaters
for MSX (MSX) 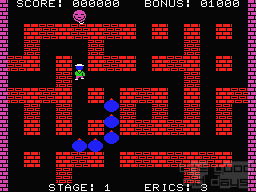 Having problems with floaters? Not to worry! Eric is in the house and that means floaters will have to go! We provide our customers with best service and free insurance against partial damage or complete loss of property if incurred. Don't wait any longer, call now: 1-800-GET-BOMBED! Wondering what the original Bomberman game was? You are now beholding it! Though, only the japanese release happens to bear the familiar title and I personally played the european version which accounts for the currently chosen name.

Eric and the Floaters or Bomberman was decidedly one of the 80's most unique and popular 2D arcade games as well as one of the best known MSX titles. As Eric the Bomberman you wander in an array of static and randomly generated maze-like stages infested with so-called floaters (mutant flying baloons as it seems) and your job is to exterminate them all by planting bombs around. Naturally, you must avoid direct contact with the floaters whose behavior is very erratic, your own bombs which detonate in a few seconds and dead-ends which may, too, lead to a very intimate date with the floaters.

Each stage consists of differently arranged brick units thus forming a labyrinth. The solid ones are indestructible and the hollow can be demolished with bombs to make way and/or to uncover some bonus objects or a shortcut to the next level. Which is to say, wreaking havoc and blasting everything down from the get-go can be a very good idea, but you should be careful not fry yourself or destroy any of the uncovered objects, which otherwise will invariably produce more floaters. Eh? Yes, that's right, it will spawn more floaters!

You have an infinite supply of bombs. Awesome. They explode in all four directions both vertically and horizontally forming a white cross of hot debris extending far enough to kill a few baddies all in one go. You can set up to 5 bombs in a row which may ensure your success, but may also compromise your own life if not cautious. Obviously, if one bomb goes off it will trigger another within the explosion range. It takes about 5 seconds for a bomb to explode which is more than enough to get yourself out of the way.

As expected, on each stage you are to encounter a greater number of floaters, which isn't the biggest challenge, though. Every now and then you get these special 'bomb auto setting stages' in-betweens, which is pretty much self-speaking. Yes, the computer assumes control over bombs and takes it to the max, which means you have to constantly move and avoid your own bombs more than the floaters. It's particularly fun when your friend does it by pressing spacebar repeatedly just to tick you off, which used to be my story. Good story.

The game is quite amusing and frolicsome. It may lack a bit in graphics, variety of enemies and difficulty, but I would spare the unnecessary critique. Let's not forget, this is only 1983 and back in those days this was actually THE BOMB (you knew I was going to say that, right?). Besides, as previously stated it lay the foundation for all the following products of similar type and that alone calls for plenty of kudos. It's the concept which is prior here, not representation. A the end of the day, they can produce tons of cool remakes but the original will always remain one and the only true legend.