Chambers of Shaolin
for Amiga (OCS/ECS) 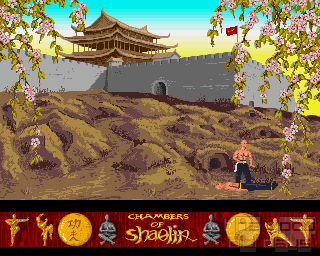 A fighting game which actually gives the whole punching and kicking some context? Unheard of! Not only does Chambers of Shaolin have some sort of story (a “save the princess” plot, which outside the genre wouldn't be all that special, but within the confines of the genre… well, you know what you usually get), but it even uses this to refine the usual gameplay. If I had been part of the marketing department at the time, I would probably have printed something about “role-playing elements” and “customized character development” on the box.

So what is this all about then? Instead of just selecting a character, you first have to define it. In six solo levels, you train your character's skills in disciplines like avoiding hits, kicking a pendulum with the right timing or walking on trees first. The better you do, the higher the stats when you finally go out and face the real bad guys. Where higher stats make a real difference to your performance, then. The main difference therefore is not in selecting fundamentally different fighters, as one may expect these days. Basically, all characters are the same. The difference is in how well yours performs, i.e. in quality rather than diversity.

The actual fighting is not particularly spectacular at first glance. The available moves make sense and they are easily triggered using the logical and responsive controls. What's really noticeable is the very fluid animations which make the game still attractive to look at in action, where the sprites themselves as well as some of the backgrounds – while acceptable – have aged visibly. I.e. don't trust static screenshots too much.

It is nice to remember that there was a fighting game tradition before Street Fighter II set the standards. While it was maybe a deserved mega hit, it did stop all innovation, with only imitations pouring in afterwards. There are, after all, other imaginable variations than just adding more “special moves” (which are impossible to trigger anyway). 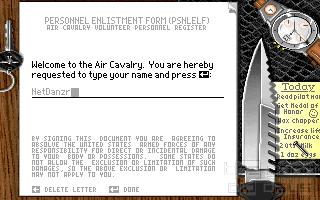