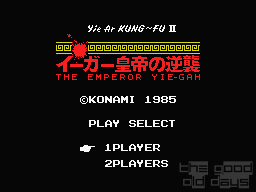 Another martial arts tournament? Great. Only this is not a matter of free will and personal ambition. As a newly-made kung fu master Lee Young your noble quest is to free China from the grip of the evil martial artist Yie-Gah who happens to be the sole survivor of the villanous Chop Suey Gang formerly annihilated by your father and who has conceitedly declared himself a new emperor. As anticipated though, before you face Yie-Gah and depose his tyrannical regime you must defeat his best henchmen warriors trained in different martial art styles...

Yie Ar Kung-Fu 2: The Emperor Yie-Gah is an arcade 1x1 fighting and a sequel to legendary Yie Ar Kung Fu, game which curiously enough had two different incarnations with some stark differences in appearance. Indeed, only MSX and NES ports seemed to be identical, while other platforms hosted a very similar but, by and large, a different game product with protagonist named Oolong, though released about the same time by the same Konami. Certainly, it's not a single case in the history of game production, but I should say, this duology is particularly confusing in that it may provoke an idea that there are really three chapters instead of two.

Yie Ar Kung Fu 2 inherits the original gaming style and art of the MSX/NES prequel with little changes introduced other than insignificantly altered dynamics and facelifted visual attributes. The protagonist is now fully clothed, better drawn, takes new posture and looks a tiny bit more charismatic. Likewise, the new batch of opponents exercising even more whimsical fighting skills and weaponry, but aside from that looking like they've been simply reclothed and imported from the first chapter. Yes, they are still the same chubby, which is obviously a very kung fu thing to be.

Like in the first game you have to outscore your enemies with kicks and punches while dodging their blows and various flung, stretching and homing devices. Your own set of moves has hardly changed. The sprites have been somewhat revamped, but the notoriously two-frame choppy animation still remains, which is a hallmark of both MSX/NES ports of the original game and the alternative release(s). The continuous irritating background music all during the game is now slightly better sampled, only, unfortunately it doesn't make it less irritating.

From the really new stuff there are powerups to restore health, temporary invincibility, and three-screen stages in the beginning and further in-between “legit” bouts featuring flocks of little dudes attacking you with a flying kick from both left and right sides as well as moving at three different marks of altitude. Apparently, it's a remodelled reaction-based bonus stage from the original MSX/NES game, only this time it's not about bonus but saving up as much energy as possible before facing any real opponents. At this point it feels like a mini beat-em-up game with a boss stage to follow. And finally, unlike its predecessor this game allows for two players (hmm.. now that's cool), but you can only choose from four different characters which can never match (..not).

Final verdict. I can't say this game differs much from its MSX/NES predecessor. The overall gameplay foundation has been preserved, the difficulty likewise remains roughly the same, and the only thing that seems to stand out is improved visuals and enhanced detail as to characters and backgrounds. Is there anything else? Well, I guess the fact that it looked best on MSX only as compared to other 8-bit ports, some of which aren't just barely playable but, in fact, hardly watchable. The most strange thing, though, is that this game being superior to its precursor was never ported to NES at all. Guess what, MSX gets another star! 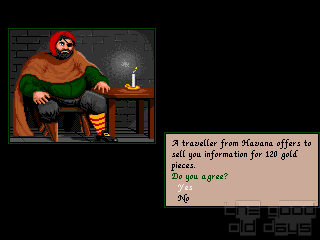