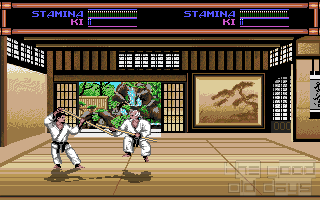 Going against three differently skilled trainers, you can practice each technique as long as you like. Within the same technique or even mixing them, one fighter taking one weapon and his opponent another. Which, of course, is the real challenge. Typical rock-paper-scissors effects apply, as range and agility/speed of weapon usage differs significantly.

The final goal, of course, is to compete in the big tournament. Each opponent there has the choice of weapons and the goal is to anticipate how you can beat him. There is a catch, though. Just optimising on one weapon will not lead to success. In the course of the tournament, you can only select each weapon up to four times. So actually, there may be a good reason to select just “karate” early on, assuming that the first opponents may not be as skillful and therefore still be beatable even with a range disadvantage. The opponents hold some surprises as well, suddenly using weapons which aren't even available to you.

Budokan represents an interesting intermediate stage in the development of the fighting genre. Whereas in the 1980s, it was common to have identical or at least similar fighters competing, the 1990s brought freakier and freakier “characters”. This game gives the opponents some personal flavour in textual descriptions and then gives them gameplay-relevant variation through the weapons.

Pretty good graphics and animations make Budokan an playable game even today. It's not one of those ultra-fast fighters and it is not nearly as “spectacular” as some other games; rather, it is more of a “fighting simulation”, favouring timing and reaction over wild maneuvers.

Mr Creosote:
Originally posted by Moebius at 06:26 on March 11th, 2017:
Why bother with so many moves if you can get away with just two, especially when the rest is just utterly useless and self-damaging...
Typical weakness of the genre, I would say. Having played a good number of these games recently, you probably wouldn't believe how far I got in many of them just doing a crouching kick (for lack of a better term). Or you probably would. If it's at least a combination of moves you need, that's acceptable in my book (albeit far from perfect).

Moebius:
Granted, i actually discovered and played it in the 2000s already, but then i could still enjoy some other fighting games which were even older. Budokan i didn't enjoy for a second and played it only to see the end of it using a combo of 90% flawless hits, which actually is another downside to the gameplay. Why bother with so many moves if you can get away with just two, especially when the rest is just utterly useless and self-damaging... also, while the postures are ok some of the actual moves, the kicks specifically, look ridiculous. Speaking of PC version, i was also quite annoyed with the digitized speaker output.
Mr Creosote:
Animations, for a game originally developed on an IBM PC, I found actually quite decent for the time. Clearly, this is not a spectacular or flashy game, as mentioned in the review. I appreciate its down-to-earth angle, actually. Although clearly, when the mood strikes me to pick a fighting game for pure enjoyment (i.e. outside of reviewing duties), Budokan is not the first pick.
Moebius:
Well, first off, choppy animation for some moves, which is mostly unexpected as still pictures suggest a different idea. Secondly, very unresponsive and inconveniently defined controls. I hated those delays between pushing and execution of moves and my fingers would get tired. And lastly, there could be just a few more special effects, like enemies jerking back on hit etc.
Mr Creosote:
So what bothered you about it?
Moebius:
It looked very attractive alright, but the gameplay was very weak in my opinion.
[Reply] 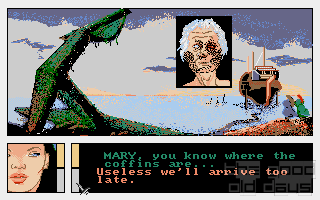