The Way of the Exploding Fist
for ZX Spectrum
Also available for: C64 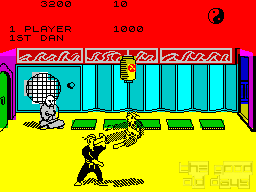 “Kiaaai!” - you shout and “Smash!” went the sound of shattering brick turning into a pile of rubble. Compliments, that last triumphant chop has earned you a black belt in karate and you are no longer merely a student. And what are your big plans for tomorrow? Probably prove to the rest of the world that you are the greatest in your expertise, right? Or at least worthy of note. Whatever your ambition is, your next task is to apply your skills in a real combat and progress through a total of 10 dans to consolidate your fighting career.

There are no ZX Spectrum or Commodore 64 users that are not familiar with The Way of the Exploding Fist or just Fist. It is undoubtedly one of the 80's most illustrious and legendary game titles which adorned Spectrum, C64 and a handful of other platforms. Now, I rarely downgrade Spectrum when comparing it to its rivals, but this time I have to concede that C64 version seems to be slightly ahead of the former with respect to details, music and sound effects. Which is no surprise, it was originally a C64 release.

One of the major winning aspects of the game is certainly graphics. The character(s) are wonderfully drawn and smoothly animated, even if slightly disproportionate. The alternating static backgrounds are catchy and florid, especially on C64. And when it comes to said attributes Fist could probably contend only with International Karate and the much less renowned The Way of the Tiger, which, in my opinion even excels Fist in certain regards and looks best only on Spectrum.

The game offers a single or two player modes. There can be 4 to 8 rounds depending on how well you perform. You can exercise a total of 10 different attacking moves comprised of fair selection of multi-level punches and kicks as well as defensive blocks initiated on opponent's hit + your retreat button, which is one thing I always loved about this game and which sadly wasn't implemented for many other like products. Additionally you can perform back and front flips, which are, frankly, far from being realistic.

Each of your successfully performed attacks will knock your opponent down with a single delivered strike, which is a realism-aimed philosophy shared among pretty few games of the past. Can't say it's a definite plus though, only a matter of preference. For each knockdown you receive either one half of Ying Yang or a complete token if the old sensei decides you did a good part. 2/2 complete Ying Yangs will grant you +1 dan out of 10. On each such achievement you move to a new area and fight a stronger opponent.

Now the unattractive bit. While some of the moves are just downright non-karate-like and, as always, semi-useful, some are outrageously unrealistic like the reversed spinning kick. I mean, have you ever seen a kick like that? I haven't. Also, what always ticked me off is that to turn around you have to perform the same very kick incompletely, which may not immediately work out. Just... why?

Next thing might be redundant considering the age and capacity of 8-bit systems, but I would really love to see a greater variety of opponents and not just another copy of you, however evolved. I would even sacrifice all the pretty backgrounds just for the sake of other characters and their special moves. Besides, the game seems to be just a little too easy, and more contrasting variety of challenge could amend it somewhat. So far the only challenge this game poses is mastering controls which for a novice, indeed, might be a little confusing.

And the final dissappointment. When you finally get to 10th dan the game... just keeps on playing. Oh, for Christ's sake, people! At least give me some lousy announcement like “Congratulations! You are the most baddass dude!” and start the game over! I always had a thing for some kind of finale, whether scanty and unimpressive, it's still more or less redeeming than this endless infernal loop. Or is it because the game is too easy that its authors decided we don't deserve a proper conclusion? Well, phooey!

Rants apart, this game is still majestic and has definitely earned its rightful place in the hall of fame. For its own time and platform(s) it sure is a marvellous exhibit still deserving a few more go's every once in a while. Not that it's a very productive thing to do, but it sure is soothing to severe boredom and depression. Ever tried fortune-telling a-la “She loves me... she loves me not” on fighting games?

Mr Creosote:
Feel free to share anything about The Way of the Exploding Fist (1985) here!
[Reply] 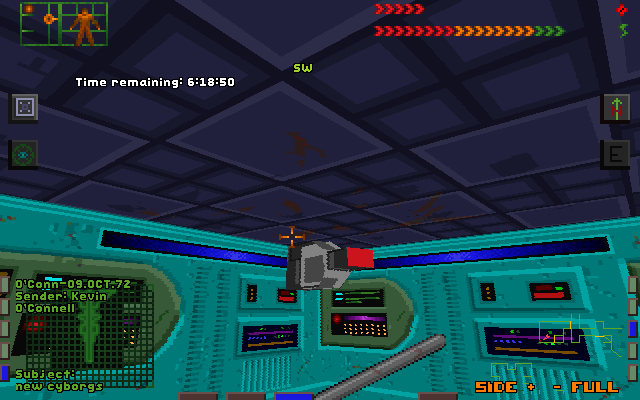