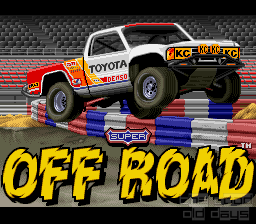 Super Offroad is a very simple racing game. With a jeep you drive against three opponents (alternatively another human player amongst them) on tracks each sized exactly one screen. Appropriate to the name the terrain is covered with mud, hills and rocks.
Between the races you have the opportunity to improve your car by spending the money won before. All the usual components as tires, engine and stocks can be improved step by step, having more or less effect on your way of driving. Classic "Nitros" for a faster acceleration are available, too.
Unfortunately, there is just one game mode existing: an infinite mode. When becoming at least third, you qualify for the next race without any damage; being fourth, the tiresome gained components of you car are relegated some steps down, not meaning that you don't have a chance anymore. The "infinity" of the game is possible because of the frequent repitition of the tracks, which seem to be in a random order - occasionally, new tracks appear. Necessarily motivation decreases after some time without having an aim. The simple but good concept of Super Offroad would have had a lot more potencial: Why aren't there tournaments or championships for example?
Besides that, everything is fine: The tracks are always easy to survey as they only cover a single screen, the graphics are beautified by reserved Toyota banners and the sound is more importunate than ever - that's how we like it. The not adjustable level of difficulty is acceptable even if you seem to be on an eternal second place at the beginning. As soon as you've improved you car's equipment to the maximum, an excessive Nitro-war against your old rival in the grey car begins. However, in the long run driving without an aim becomes less funny.