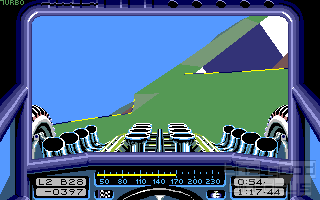 Are you a fan of rollercoasters? Do you like the thrill of acceleration, the feeling of plunging down uncontrolled? What if it weren't just a feeling, but the rails were taken away? Well, it's still just a computer game, don't worry. Though one which does indeed manage to induce some vertigo in spite of â€“ by today's standards â€“ crude graphics. 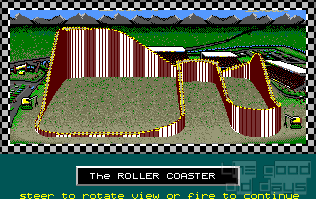 One track is literally called “The roller coaster”

Tracks raised above the ground and not just snaking left and right, but also shooting up and down and requiring jumps, the one concession towards making the players' lives a bit more secure is the automatic alignment on straights. Stunt Car Racer shows no qualms about letting cars fall off, plummet from greatest heights. That moment of total silence when leaving the tracks, floating through the air, in the knowledge that this will not end well.

Nail-biting thrills wait when accelerating for a long jump, hoping to just make it across. Starting in the second highest division (of four, plus the “super league”), acceleration stops being everything, but pacing yourself in strategic places and saving those boosts for those few straights is key. 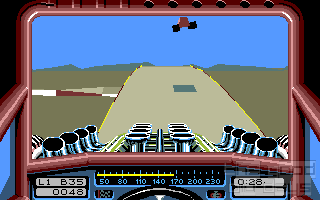 The one other driver feels rather like an afterthought. They are hardly ever seen anyway, as they will have either pulled far ahead or be trailing behind. Consequently, the two-player mode via nullmodem may have its extra merits in enabling more direct competition, but finally, it stays mostly at imaginary level. After all, the same observation of the cars rarely being close applies.

That said, it is amazing how much fun it can be to just drive by yourself! The tracks are well designed to highlight exactly those core features which sets this kind of driving apart from other racing games. Each has its own little gimmick; some spot where you have have to come in with just the right speed, at just the right angle, moving and accelerating just the right way. Though for every such instance, there is a way.

Deciphering those little puzzles and then executing the solutions to perfection is what Stunt Car Racer is all about. The basics are easy to pick up, but the game will last nevertheless. The possibly only complaint lies in the low frame rate of the graphics which unfortunately doesn't improve on faster machines. That aside, this was pretty much perfection even when it came out. 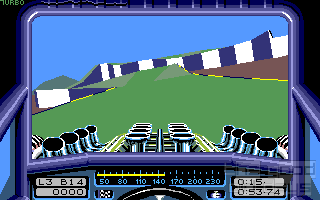 This being an enduring classic, it received continuous care by the community. Thanks to WHDLoad patching, it can today be enjoyed in a much more fluent “turbo mode”. Careful, though, as this will disable any speed checking. I.e. when you set your emulator to maximum speed possible these days, the race will be over before you've pressed a single button. It works best at around regular 68020/68030 clock speed.

In 2004, another fan even created a reverse engineered modification called Stunt Car Racer TNT (The New Tracks). This version is identical at its core, just sporting those eight new tracks. Those are carefully and well designed as the original ones. Great work, just the change of the colour palette (the tracks received a weird green-ish tint) is a little irritating.

Before he began to make “serious” racing sims like Formula 1 Grand Prix, Geoff Crammond created this Amiga classic. It is set in a fictional (or let's say I hope it is fictional) Stunt Car league. There are four divisions and the player of course starts in the fourth. In each division there are two courses on which all three drivers (of the division) have to race against each other in head-to-head duels. Points are awarded for the best lap and the winner. At the end of the season, the best driver of each division gets to the higher division, while the last one is relegated.

The special aspect of the game are the courses. You don't drive on an ordinary road on the ground but on a track built some feet to many metres above the ground! If you're not careful, you'll just fall down. In this case, a kind of crane will put you back on the track, but you've lost worthy time of course then. And your car is of course not unbreakable! Too much damage will simply destroy it. There's a “bar” on the top of the screen which indicates how much damage you've already taken. If the crack spans the whole width, you're wrecked and have lost.

The courses are overall well designed, with many curves, hills and jumps. Sometimes, they're not even static, but move around a bit. When e.g. a draw bridge is just about to go up, you'd better slow down or otherwise you'll crash right into it...

There are many options that will keep you playing a very long time! Single players can try to win the championship, but even if they win in the first division, there's still the “Super League”. The save funtion makes is much more comfortable because it's not necessary to start all over again everytime. Then there's the option to link two computers to race against each other. Great idea, although I doubt it'll work with an emulator - too bad!

Stunt Car Racer is simply quick fun. The seasons and races don't take hours to complete, everything's always moving. Just the way I like it!

james:
oh my god - i remember playing this game when i was 5 years old!!! does anyone know where to get this from? (ps im 19 now so thats AGES ago!)
Anderz:

blommaert steve:
i never had a better time in my live than on a amiga
The Rumpled Academic:
I love this game on my Amiga, but I can never get past league 3. This game is very, very hard once you get past league 2. Beware.
Mr Creosote:
Feel free to share anything about Stunt Car Racer (1988) here!
[Reply] 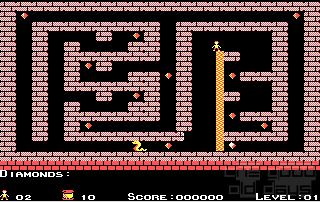