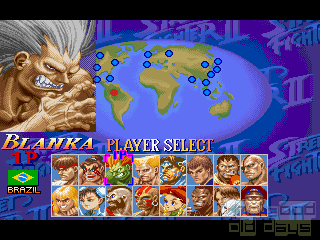 The final Street Fighter II game on the Amiga did not come from U.S. Gold. And, wow, does it look amazing! Is there some hope, finally? Gametek took a consistent route of dropping support for legacy systems: the game has to be HD installed; without a gamepad connected, you cannot even start it, so put your regular single-button joystick to the side. They meant business! Right?

Bad news: don't judge a book by its cover. The screenshots may look great, but the game looks horrible in motion. The "animations" are so choppy and jerky that playability suffers greatly. So far that opponents are actually unbeatable.

Shouldn't be an issue anymore these days, with everybody having even higher-powered (virtual or real) computers, right? Sorry, things don't improve with faster machines. "Turbo" mode doesn't change a thing, either and so doesn't the "detail" setting for the graphics. Sound is different. There is nothing to complain about. Because there is pretty much none at all. 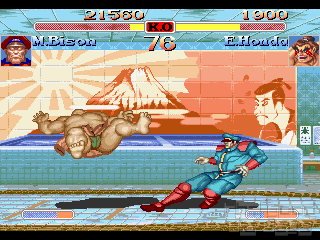 All things point towards one conclusion. It was apparently not considered necessary anymore to try and make actual adaptions for the Amiga at the time. Which would have been necessary to make it an enjoyable port. Simply expecting everything to work the same way as on the original hardware – no, sorry. Sad, considering that other systems which didn't even have stronger hardware had much superior versions.

Even more sad: looking back, there wasn't even a single SFII version on the Amiga which was really convincing. The seminal game which turned the genre upside down never really happened on this computer. And the first port, widely criticised, remained the highlight (relatively speaking) until the end, as subsequent versions actually got worse and worse. This one can't even have been tested properly. Otherwise, they couldn't have thrown it on the market. Or could they?

Moebius (2017-05-01):
Quote:
The "animations" are so choppy and jerky that playability suffers greatly. So far that opponents are actually unbeatable.

Both statements are equally true, but I wouldn't connect them nonetheless. This game is just genuinely and tremendously difficult, which is the main reason I've always neglected it.