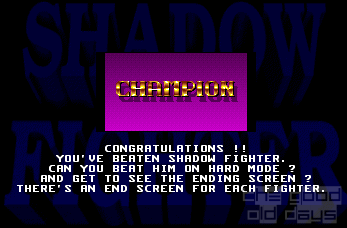 The Shadow Fighter is some rotting zombie bloke. For some reason, a number of other fighters have some beef with him. So they first beat each other up, then face Robert Patrick from Terminator 2 and then go for the titular antagonist. I may have made fun of other genre plots and their illustration in silly still pictures between fights in the past, but after playing this game, I take it all back. This one has exactly nothing. It feels like there is something missing. 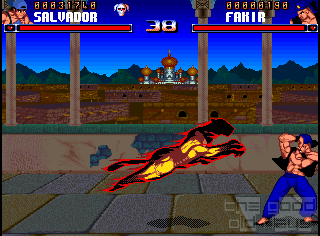 OK, OK, plot will never be a really important aspect in this genre. So let's talk about audiovisual presentation instead. Shadow Fighter looks quite good. The Anime style sprites lend themselves well to fairly smooth animation. Sound effects and music are as expected, but don't leave a lasting impression.

Gameplay is generally fine. It is a bit unexpected that many of the computer-controlled opponents act a quite defensively, but this is still better than being assaulted with ultra-fast maneuvers right away. The well-drawn sprites promise quite a bit of variety for the characters: there is your typical monster-type brute, a 14-year-old boy, a gay policeman armed with a truncheon (you don't want to think about where he usually puts that…) and a gun… When it comes to playing, this promise is not completely fulfilled, but there is enough for everyone (and the already mentioned robot is really different from the others). Moves and abilities may not be fundamentally different as far as the standard moves are concerned, but fighting tactics still need to be adapted according to each character's strengths. The few special moves all come straight out of Street Fighter II: electric shock, fireball, rolling attack etc. 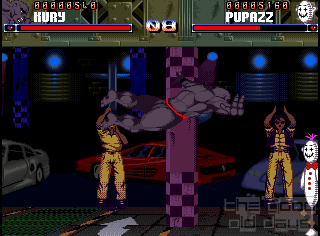 As far as game modes go, you get pretty much the standard ones. The only one which the developers really have to be congratulated and thanked for is the training mode where you go against a dummy. Which then actually defends itself! So it is both funny, but also extremely practical to really try out the moves of your own character.

Apart from the extensive floppy disk swapping, there is nothing wrong with Shadow Fighter. It's fun, as usual in the genre much more so when you have some friends around to play against. Graphical quality (including animations) and responsive controls put this one above the competition. It still may not be the game to crown the genre once and for all, but it is quite competitive.