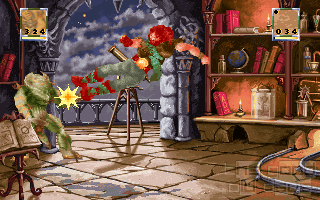 For once, a fighting game which did not originate in the arcades or game consoles and which doesn't even try to imitate those. Well, at least not too much. At least it goes its own way graphically. 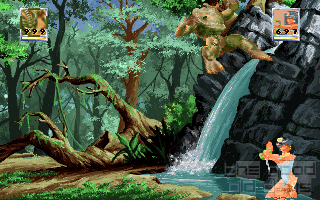 Instead of a cartoony look, as in most previous genre classics, or polygon-based characters seen from freely zoomable and turnable viewpoints, as emerging in newer games, Warriors uses hand-drawn backgrounds and sort of three-dimensional character sprites projected on top, but still only in two dimensions. It is one of those games which look great on screenshots, but only so-so in action.

Backgrounds are not animated at all, although many of them incorporate elements such as (non-) running water. The sprites look strangely blurry. Their three-dimensional modelling is only taken advantage of in the “replays” after the fight, where the camera then actually moves around to different angles, but which take place on – to put it nicely – “neutral” backgrounds. Clear skipping fodder. 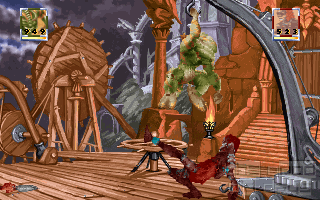 Gameplay-wise, there are some good ideas all of which turn into disappointments. Some characters wield weapons which can be used, but also be hit out of the hand, picked up again etc. They don't make much of a difference. Second, there are some ways to interact with the background. E.g. you may hold on to a hook or a vine and swing to kick the opponent really hard. In theory. In practice, when you're dangling from the virtual ceiling, you only have a split second to do something useful, as no sane opponent would get close again anyway and no weapons can be used from up there. So both these things look very good on paper – they were what really made me want to have the game when I read a favourable review when it was new – but the ideas are wasted.

Being an original computer development, the game uses two fire buttons and moves are optimised towards these efficient controls. Efficient, unless you try using the keyboard. Colourful character design does to keep motivation up at least for some time as well. Though Warriors just doesn't deliver what it promises. It's playable and somewhat fun, but ultimately disappointing. 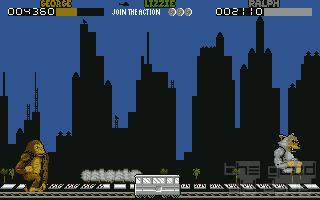