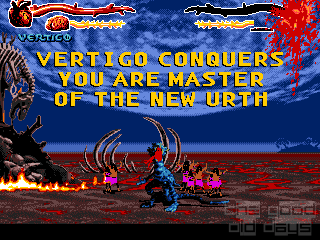 Pre-historic monstrosities fight for supremacy as the new god of a postapocalyptic earth (now "Urth"). The few remaining humans gather around these creatures, worshipping them. For which they are thanked by serving as emergency food should life energy ever run low. Well, at least this is what you'd expect if you played the original arcade version… 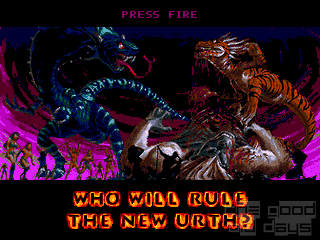 The Amiga port of Primal Rage was close to being cancelled a couple of times before it finally got released anyway, though with various features stripped out. Among other things, the unique feature of having quick snacks in the middle of a fight has been left out – worshippers are only reduced to a window dressing function. Some special game modes are missing as well; basically, only the main campaign of beating the other creatures one-by-one remains. Pity.

On the technical side, there are some limitations as well. Although marketed as an AGA game, Primal Rage will actually run on any ECS Amiga as long as it is equipped with at least 2MB RAM. Something few people had at the time, so it has to be assumed optimizing attempts failed. The colour palette of course had to be reduced; each sprite is basically tinted in a single colour. This doesn't even look half bad, and animations are quite smooth and surprisingly detailed, too. At the expense of the action being a bit sluggish – everything moves as if it takes place inside a thick liquid. 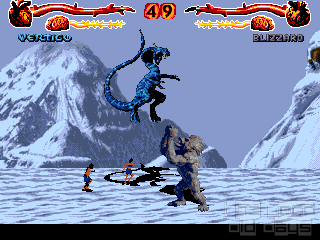 Nevertheless, it is still a fun game. The control scheme is actually closer to classic IK+ style rather than the typical convoluted arcade extravaganzas. You push the fire button and chose a move by pushing the joystick in the right direction. Although there aren't even so many different fighters (basically some dinosaurs, two giant apes and a snake-like creature), this is enough to make for a good amount of variation of possible tactics. Special moves are often on the intentionally funny side (farting…) and things get exaggeratedly bloody at times.

One option which is in this version is the strength adjustment in multiplayer mode. Although often the selling point in games of this genre, duels between human players can be extremely one-sided if both are not very close in their skills. Primal Rage allows for handicap settings, which is really something more games should offer.

In spite of the first disappointment with this particular version, the game still grows on you. Even having lost some of its unique features, the basics are just right in this one. If we hadn't known about the original, we probably wouldn't have missed a thing. And to stress one major point once more: what really makes it a sympathetic genre entry is how it shows that you don't need dozens of fighters and countless moves to make a solid genre game.