The Incredible Hulk
for SNES 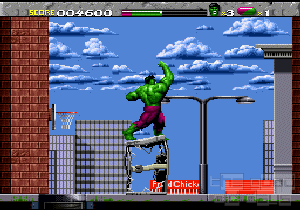 I have to admit that I know nothing about this comic-myth 'Hulk'. But I'll try my best to do justice to him (?) in this review.

Hulk the Incredible - a character full of metaphors. Hulk the Human - he's like you and me. When it is the time again when his skin turns green and his muscles swell, he's standing on a street filled with shooting robots. Apocalypse now in a modern form. The Final Court. Even if it's unbelievable: At this point YOU get into the action. YOU are Hulk. Didn't we all want to be him sometimes? The time has come now.

Hulk can run, Hulk can jump and climb. And as everybody else is quite bad, he can punch, too. And he also has morals. He is literate, has studied Kant and Nietzsche. Vigilante justice is his third highest principle after the Stars and Stripes banner and the constitution.

He's strong, but even his energy is exhaustible. When he's hit very much in fights he turns human again. But not for all time because he has three lives.

Hulk has bad luck: Whereever he goes, his enemies await him. But he gets through and is able to escape from the sewers and the city. Get past the big boss and outta here. The story gets more intense: On his “Search for Peace” Hulk falls into a hole. He finds himself amidst the old Romans. That's a pleasure for him as he is interested in cultural history. But then it's over. He's standing in front of a rock wall, hitting it, but it is of no avail. He can't bring it down. Suddenly it comes to his mind that this game is far too average for him. Hulk's study trip ends here.