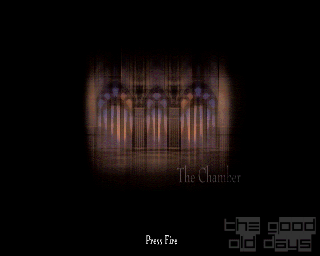 The end of a system's commercial lifetime is usually frustrating. Other computers get all the fun while you get some sub-par ports. In retrospect, however, it is a fascinating period, because the few original development which still arrived can only really be critically evaluated in the luxurious position of hindsight. At the time, all of the remaining dedicated press as well as the remaining die-hard fans would praise every single release right to the skies, no matter what it was – just because there was a release! 20 years afterwards, the boiling blood has cooled down.

Capital Punishment has been called the best-ever one-on-one fighting game. Developed by an (uncredited) talented Serbian team, the game indeed features some very good animations and impressive light and shadow effects. The last fight even takes place completely in silhouettes against a shapeshifter – pretty cool idea. 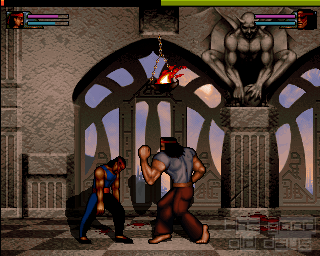 Gameplay-wise, there are a couple of extensions to the typical genre fare. First, arenas feature little traps, such as spikes emerging from the walls or a metal hook moving around a factory. If one of the opponents manages to get his/her counterpart on that, the fight is basically over. Second, both fighters have the option to go into a fake fatigue. You know when you take too much of a beating in these games and you are defenseless for some seconds? Here, you can pretend to be in this state, to lure the enemy close and the strike. Fun in two-player mode. Third, a hit does not always equal a hit. Rather, a hit to the head can be different from a hit to the legs etc.

The eight fighters, of whom four are selectable, offer sufficient variation concerning their abilities and fighting styles. Based on the convoluted, highly silly backstory, the main "story" mode even allows you to switch characters mid-game to adapt better to specific opponents. You see, the other three selectable characters have been "enslaved" and by beating them up, you "free their souls". Well, whatever.

So far, sounds pretty good, doesn't it? Well, mostly that was only the theory on the drawing board. In practice, your first major struggle will be to get it to run at all. Although I do own a real A1200, equipped with the necessary hard drive, extra RAM and a snazzy accellerator card, even after downloading an official patch and creating a dedicated boot disk was not enough for it not to crash instantly. Only by also applying a fan-made patch, which came some years later, it finally started working – though even with that, it is still kind of unstable. Do yourself a favour and download the pre-installed version; it will save you a lot of headache. 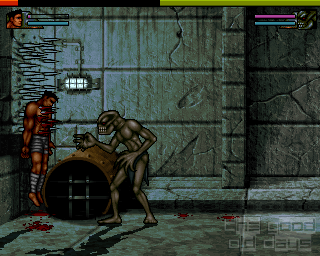 Second, and probably even more importantly, single-player mode is totally useless, because it is insanely hard. Obviously, little or no time went into overall balancing. At any time of the fight, taking three hits in a row basically means instant game over. The fighters' overall energy is way too low compared to what you lose per hit. Computer-controlled opponents all act super fast, even in "training" mode. Not a combination which makes the game playable. Often, you will find yourself pinned to the wall and bleeding your life out before you've even managed to pull off your very first move.

In a group of human participants, things become a little fairer simply because both competitors will have the same restrictions. It is somewhat playable then, but still hardly great as similar imbalances based on pure luck still apply: two or three lucky initial hits, and you've won. Not exactly the recipe for fun. Nevertheless, two-player-mode is the only thing that gets this game its ok rating.

Really, what Capital Punishment is good for is a tech demo. Like earlier games, such as Shadow of the Beast, it looks and sounds very good in motion (you'll just have to believe me here, the screenshots cannot adequately show it). It's a very desirable game… until you actually try playing.