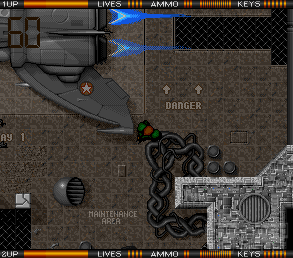 Two pilots encounter a space station where something's fishy. It has been overrun by aliens. Heroic as they are, they decide to clean the place out. No questions asked. It is the first encounter with a sentient otherworldly lifeform, after all. So what other option is there but to shoot? Right, thought so.

Maybe it's just that they've just watched Aliens. Nowadays, with the so-called prequel series (starting with Prometheus) being in full swing, things may have gone somewhat back to the roots stylistically, but at the time this game came out, the ultra-militaristic action blockbuster from the mid-80s was what most people had in mind – and Alien Breed delivered on those expectations. 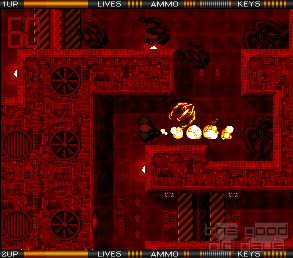 Which may have been one driving force for Team 17 to hit a gold mine with what was only their second game. The Gauntlet style game was immensely popular with their local press. Though of course, it is worth reminding ourselves that the British computer game press had the tendency to be over-enthusiastic about every British made game. It was also a commercial hit, however, and established Team 17 as a major developer over night. At least it felt like it.

The game formula with one or two human players walking the six levels of the space station in overhead view, shooting aliens, is of course sound. The background graphics get the atmosphere of the abandoned station with its cold, metallic design over well. Scrolling is very smooth. Weapons are well distinguishable graphically and sprites move smoothly as well. Though actually, it looks a bit like they're gliding rather than walking. And, boy, what is it with this pityful player sprite? A testament of the main graphic artist's son's emerging talents?

Actually, when it comes to the details, things are not quite as perfect as they seem at first glance. All through the game, there are only two different enemies (apart from the level bosses): walking aliens (with minor graphical reskinning per level, but always fundamentally the same) and creeping insects/maggots. Levels are badly designed; in order to achieve a maze effect, they never leave the impression of a real space station, as almost nothing follows any sane function. One of the few exceptions being the fire doors which permanently close if any stray shot hits them, forcing the player to take long and potentially dangerous detours. They show that good design elements not only would have made the levels more logical, but also could have helped in gameplay terms – discouraging players from careless shooting, in this case. 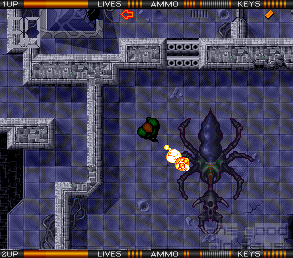 Power-ups, on the other hand, make sense all around. OK, it makes no sense that weapons (and other tools, like an automap) can be bought at computer terminals (how does that work?), but that's acceptable. First aid kits, ammunition, money and keys are just lying around on the ground, waiting to be collected. They often lead to tense trade-off situations where the players have to decide whether to open a door and enter a room for the bonus, but at the risk of being hit by more aliens.

Now, having mentioned keys, a major gameplay factor turns out to be key management. The mazes are full of locked doors, which can only be opened with this limited resource. It happens frequently that you run out, which often means you're stuck forever. Imagine that: you've fought your way all through five large levels, shedding a lot of blood, only to finally fail, because you couldn't get a specific door open. Or you trigger a level's self-destruction and now have only 60 seconds to get to the lift before everything blows up. Oops, one key too few. Game over.

There is no in-game music and sound effects are on the bottom scale of the acceptable. Weapons sound alright, but the player's strange grunts will make you turn the speakers off in no time.

Overall, Alien Breed could have been a really good game, especially in multiplayer. Though it is lacking severely in the details. The few fresh ideas are drowned out by bad or lazy design decisions and mediocre production values in the overall picture. The feeling of having seen everything sets in too early and even frustration shows its ugly head at times. It's not a bad game, but certainly it doesn't nearly exhaust its own potential. 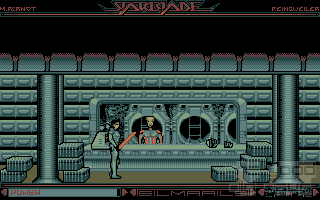