The Superhero League of Hoboken
for PC (VGA) 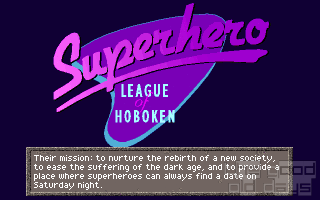 The Superhero League of Hoboken is another hilarious game written by Steve Meretzky for Legend Entertainment. After a nuclear apocalypse, mutations caused by the resulting glowing garbage and "decaying Nintendo packages" have turned most harmless everyday things into horrible monsters. They've also given some humans incredible superpowers – like being able to raise a foe's cholesterol or make fantastic flow-charts. What were once small towns are now "thriving" city-states, protected by "Superhero Leagues" – and you play as the leader of the worst one… in Hoboken.

The game combines elements from Adventure games and RPGs. Each "level" leaves you closer to defeating your arch nemesis, Dr. Entropy, a clown/jack-in-the-box mutation bent on plunging the metropolitan area into chaos. As you complete missions, your League rises in status and prestige, you're rewarded with experience points, and more superheroes flock to your door.

The RPG gameplay is fairly straightforward. You can choose which goofy superhero companions travel with you around a map of the areas surrounding New York City. Each character has Brawn, Brains, and Toughness, which determine how they fare in combat. They also have their superpowers – and, yes, the ability to see what's inside a pizza box without opening it can be helpful in this game.

You will also have to solve puzzles to advance and complete missions. Like any standard adventure game, there is a fair amount of trial and error – trying to combine one object with everything else in your inventory. The game itself is oddball, so some combinations of items are not immediately apparent. And you can get stuck, so this is one of those "save early, save often" games.

The Superhero League of Hoboken is a blast to play. Packed with Meretzky's smart/cheesy humor, flashy VGA graphics, and a great MT-32 soundtrack, SLH provides hours of fun. If you like mid-nineties political humor, challenging puzzles, RPGs, and mutant McDonald's cheeseburgers who try to kill you, then this game's for you!

Gameplay of the Floppy Version