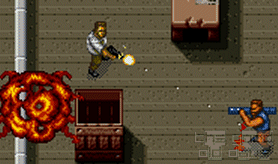 Oh, a game based on a movie. And even with “Big Arnie” Schwarzenegger! That must be great! But as it is the fact with most such games True Lies hasn't that much in common with the original movie. Showing some small pictures between the levels is intended to continue the story but actually they just lead over to the next fights. Besides, the movie wouldn't be allowed to be shown with so many bloody deaths as in the game.

So what about the movie? Well, in a screen corner Arnold's face can be seen at all times. The player becomes (unbelievable, isn't it?) this 'Rambo from the Alps'. With a pistol and unlimited ammunition you shoot your way through huge levels and lots of bad guys and you find new weapons. What coincidence! Another UZI lying around on the floor of the shopping mall!

You get your tasks from your boss who seems to have slightly more brain than Arn. Of course I mean Arnie's movie character 'Harry' and not the ultra-intelligent Dr. Prof. Prof. Arnold S. This boss also represents a kind of permanent conscience and penalizes the all-too-trigger-happy player by reducing his life count when he has hit too many 'civilians'. That's fair vigilante-justice!

The aforementioned weapons and the usual power-ups let the player survive the quite dense bullet rain which comes from different enemies. Their danger level depends mainly on whether they move or not. That's a weak point of the game: The opponents don't change too much during the game as only very few new ones appear as the game progresses. Another negative aspect is that your 'tasks' you get at the start of a level mostly consist of reaching a certain place.

But on the other hand True Lies is immensely huge (just compare with 'Double Dragon') and you can see a great variety of sceneries which change every level. But the most important aspect which makes it an above-average game is the non-linear level layout, that means you have more options than just running from left to right! 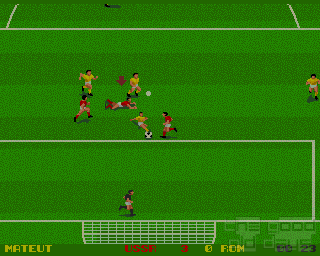