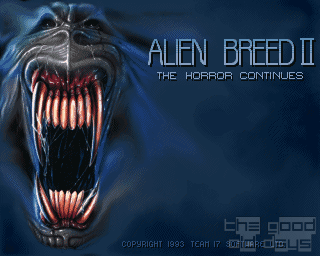 The '92 Special Edition, being only a budget release, obviously didn't bring much new to the Alien Breed series. The Horror Continues, on the other hand, was announced as the proper sequel and placed in the normal price range, so expectations should be higher. Does it fulfil these expectations? Well, to say it right away, it's a mixed bag.

This time around, the two elite soldiers investigate a colony which failed to report for an extended amount of time. Of course, it has been overrun by aliens which now need to be killed. All of them. Without mercy. Because they don't understand any different language. And so on and so forth (Starship Troopers, anyone?). Nevertheless, in spite of this being set on a planet, only the first and the last levels take place on the surface. Which is good, as those two are clearly the weakest. 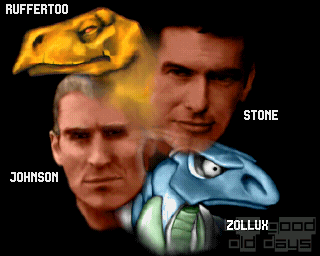 The rest is once again an underground facility connected by lifts. In theory, the game distinguishes between scientific and military quarters as well as connecting pathways, but since form still doesn't follow function, they are all in fact crazy mazes. There has been visible effort to guide the player a bit better by stronger use of one-way doors/connections. Fire doors, sealing themselves shut forever, on the other hand, do not exist anymore, which is a bit of a pity.

On the purely cosmetical side, the levels indeed look more interesting as there are more details to be found. It's not just walls, doors and floors (the original Alien Breed had one desk in the whole game), but special installations like machinery, battle robots etc. grace the levels. Usually, they don't fulfil a gameplay-related function, but nevertheless, this is a step in the right direction. 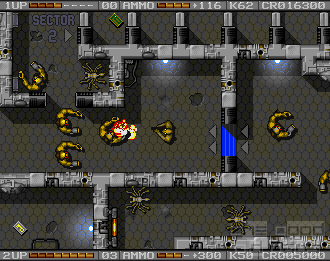 Concerning enemies, things have been upgraded even a bit more. Not only do the aliens have distinctly different looks (not just changed colours, but apart from the Giger aliens, there are also giant ants etc.), but their behaviour is also varying a little at least. Some of them shoot, some are slow and tough, some fast. Still, they all rely on full frontal assault towards the player, but once again, a small improvement. Also, there are gun turrets mounted to the walls and aliens are hiding in containers for extra shock effect. Nice.

The two human players are even allowed to choose their own characters from a selection of four. This mostly makes a difference in starting equipment and each has its own sprite (new sprites, woohoo!). Concerning the equipment itself, there are some new weapons, such as the homing missile launcher, which actually play differently. Also, each weapon can be bought in one of three power levels, which necessitates some tough decisions: buy the big flame thrower now or get the small grenade launcher for the same price?

On the downside, Alien Breed II turned out really hard. It's a typical effect of long-running series': the die-hard fans will always demand higher difficulty levels, as they are so well trained by then. Totally unnecessary if you ask me. Apart from that, its main issue is that its improvements haven't been followed through to the end. Obviously, The Chaos Engine had been released in the meantime, and it blows Alien Breed II away easily. Though if you want to look left and right from the real genre crown, this one isn't a bad pick. 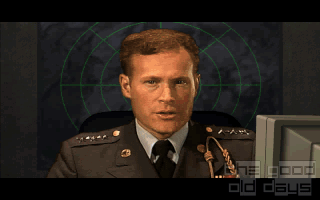