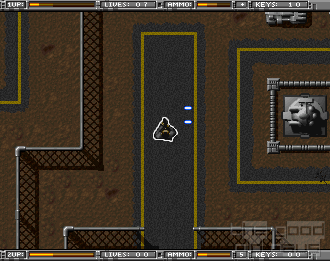 After three so-so games in three years, you should really think that expectations for the fourth Alien Breed would be low. I'm all the happier to report that with Tower Assault, Team 17 finally got their act together. It is the last one of the classic series, and also its pinnacle. Finally a game which can really be recommended. Why is that? 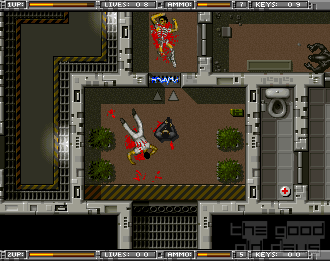 Well, it actually does address most of the shortcomings of the predecessors. Most importantly, level design differs quite fundamentally from what we've become used to in the series. Instead of a linear progression, different areas of the colony base can be accessed from a map in arbitrary fashion. They are connected through outdoor levels. These different parts of the overall base have different functions, but not only by name, but the indoor areas are then actually somewhat believable, in the sense that somebody could actually live or work there. Which concerns room layout (not as many stupid dead ends) as well as furnishing and other things lying around. Including those ripped human bodies, which may appear gratuitous at first, but actually do get one main point across – finally – this used to be a human-inhabited base!

Things don't even end there. Levels aren't just varied due to taking place outside vs. various distinguishable different inside locations. Some have special gameplay related features, some for the better, some debatable. A level featuring undistinguishable rocks some of which are explodable would be an example of the latter. Dark levels, with only a small area in front of the players illuminated by electric torches, on the other hand, fit very well into the tense atmosphere. 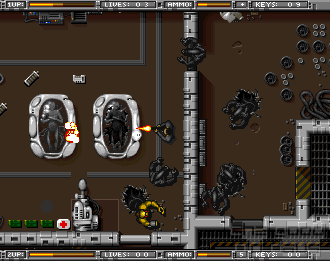 Gatekeeping the players' progress between those levels are coloured key cards, lift passes, power reactors etc., which have to be collected, reprogrammed, activated, destroyed etc. The game does a good job of balancing freedom versus letting people run into certain death (by preventing access to too hard game sections at first). Talking about hard game sections, the difficulty level has been balanced quite a bit better as well. Whereas the previous game proved extremely unforgiving right from the start, Tower Assault paces itself quite well in this regard, too. There is a clear difference between the beginning which allows the players to come at ease with the controls and the general mechanics and later stages which indeed offer a very tough challenge.

Management of generic keys (not those specific ones mentioned earlier) remains in the game, but its impact has been softened as well. Even without being too careful and picky which doors to open, the issue of running out of keys hardly ever occurs. Which, in a way, begs the question why keys are still considered necessary at all. Or, the other way around, why doors still cannot be closed by the players, in order to prevent enemies from going after them, for example?

Other small tweaks, on the other hand, do exist and prove most useful. Like for example the ability to walk backwards while continuing to shoot. Or the option to decide whether friendly fire can hurt the other player (as in the games so far) or not. The latter being particularly interesting insofar that it's not clear which setting offers more fun: the classic, dangerous one forces a lot of communication for immediate alignment of actions, but it makes a hard game even harder, probably pushing it over the edge.

So there. If there is one Alien Breed game I would voluntarily pick up to play – without the intention of reviewing it, just for fun – it is definitely Tower Assault. Playability has finally been much improved and it remains interesting to see what will come next. If this had been their starting point rather than the series' ending, it could have turned into a really competitive franchise. Instead of something which, let's be honest, people these days seem to have some fond memories of, but which nobody really has played for a couple of decades. 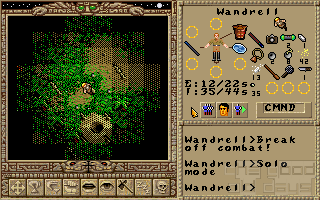