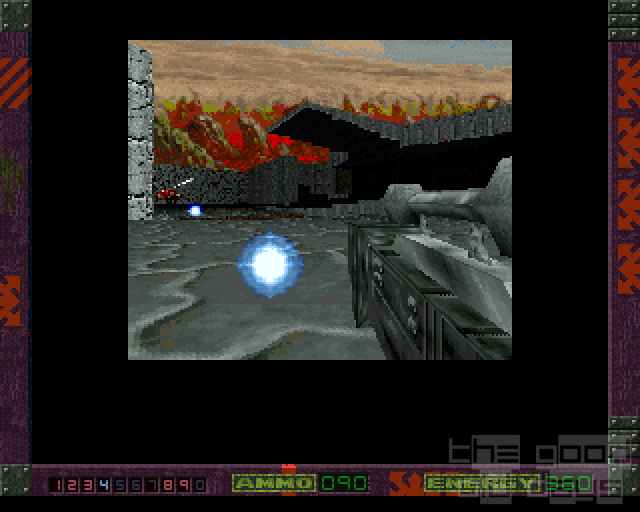 This one's a tough game to review. If you've already seen screenshots somewhere on the Internet, you'll probably be amazed by the huge quality jump from the first part up to this one. And graphics (and, of course, their effect on gameplay) were my main complaint there, weren't they? So everything should be fine this time around, shouldn't it? If only things were so easy.

Since AB3DII is basically the same game all over again as far as the gameplay basics are concerned, let's focus on the visual changes first. The dirty secret here is: what you see on screenshots are indeed actual in-game graphics, but set to highest detail and full screen. In reality, you will not find an Amiga which is able to play the game in this mode at decent speed. Such a computer simply doesn't exist. Even on default window size, still using high detail setting, my 68030/50 struggles and everything only mo-ves li-ke thi-s. Which, again, has tangeable gameplay effects. 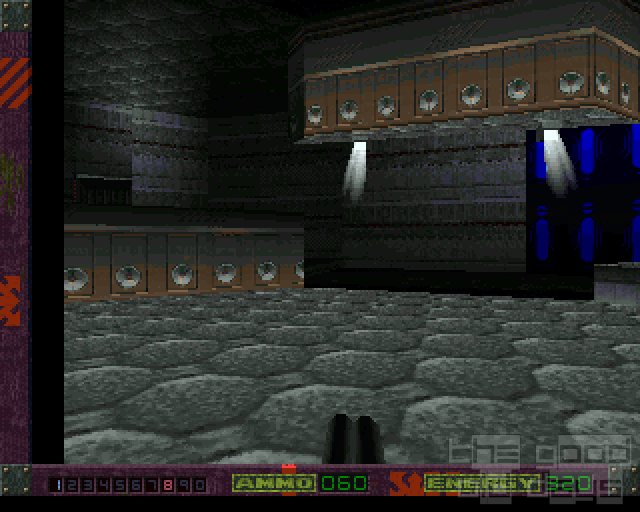 This is how it should look

Namely, in a game whose primary targeted skill is reaction, such reaction can only occur in a strongly delayed fashion. To illustrate: enemy shots knock you back on impact and slightly turn you at random. To shoot back and hit, you quickly have to re-align; but due to the lag in the displaying of the effect (and the effect of your countermeasure), you will constantly be confused and tend to oversteer. Obviously, it doesn't help at all that once the choppily animated monsters actually appear, everything slows down even further.

The game ships with a stripped down graphical version as well. Labelled “2MB version” (referencing the RAM demand, as opposed to 4MB), that one has its own issues. Basically, it goes back to the pixel mess of part 1, but even decreasing quality: neither your own weapon or your shots are visible, there are no floor/ceiling textures etc. Oh, and later levels slow down annoyingly even here.

Now, one may argue that none of this should count for much these days when pretty much everybody is using emulation anyways. Indeed, on an emulator with the right settings, the game runs perfectly smoothly even on the most demanding setting. So indeed, there is a need to discuss some further aspects.

The addition of in-game music certainly supports the atmosphere. Light effects are pretty good. The semi-transparent automap overlaying the main window (Descent-style) is actually very useful. A few levels are spiced up by little details, such as poison you have to swim (wade?) through (at the expense of life energy the longer you stay inside). Though unfortunately, that's about everything which can be said about the levels' good sides.

Rather, the typical situation the game puts its player in is that opening a door, there is a horde of monsters right behind. Doors open by touch, i.e. the enemies will be right on top of you. Which would be unfair enough, but it gets worse. Monsters are actually not solid objects (or maybe you aren't), so they pass right through you and you through them. As erratically as they behave, they will all too often suddenly be right behind you, where you are defenseless. In other cases, talking about erratic behaviour, they will simply walk around seemingly at random; not even homing in on the player when he is very close.

Some movement commands above the basic ones exist, like looking up and down, jumping, stepping sidewards etc. Problem again is that the level design doesn't reflect this much. Apart from two or three places where jumping is useful, you will simply never need any of this. Which, once again, reveals a lot about level design. 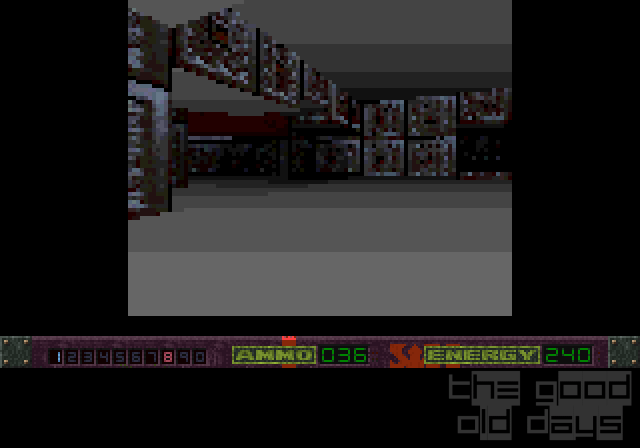 This is how it does look

So, well, even with an impossible, virtual dream machine, AB3DII isn't a good game. The challenge it offers isn't a thrilling, but rather a frustrating one. Once again, there is no stylistic or thematical link to its own name: no aliens in sight and the robots you get instead explode into an absurd green goo when shot at. There is a level editor, but only for multiplayer; and multiplayer is limited to exactly two opponents in a deathmatch in an otherwise completely empty level (boring).

The marketing ploy here was clearly to have magazines print pretty screenshots and the buyers streaming in just because of that. Long-term customer satisfaction must have been optional, as everybody will have realized at home that they'll never get what they thought they would. The labelling of the versions only according to their RAM demands has to be considered almost fraudulent; although technically correct, the CPU power required above the RAM for decent gameplay speed was never listed anywhere.

And then, well, playtesting can't have been strong even if Team 17 had had a wonder machine in their offices at the time. The whole genre of 3D shooters pretty much sinks or swims with enemy and level design. AB3DII is weak on both counts. And so ends a fairly long-running series which may never have been the cream of the crop, but always showed promise. It definitely did not benefit from the attempted leap into the third dimension. 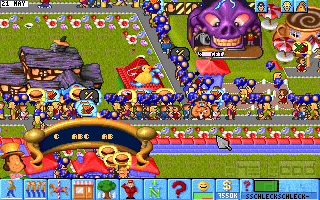