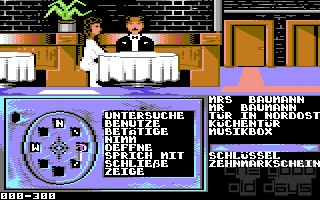 It's vacation time, so after checking into your hotel, you get drunk. What else? Intoxicated, you stumble into the wrong room and pass out. Not just from the booze, though. The next morning, you wake up next to a dead body, punctured by bullets several times, with blood all over. If there's one thing you remember of last night, however, it is committing no murder! With a huge storm raging outside, it will be some time until the police arrive; time you should use to identify the real culprit.

Crime Time is not the first Adventure game by Byteriders, but their first to take a step away from a parser input interface, albeit a small one. The scene illustrations are still static window dressing and cannot be directly interacted with. Instead, all possible actions and objects as well as the player's inventory and the available exits are exposed in menu lists on the bottom of the screen.

The joystick-controlled cursor therefore doesn't have long distances to cover. There is also absolutely no confusion about searching for hotspots. It is a system which works well, but has the charm of working with a spreadsheet.

This is somewhat balanced out by the tone of the in-game texts. In classic genre tradition, you get a number of corny lines which would be strictly speaking inappropriate in the protagonist's situation, but do help to lighten the player's mood, which is only appropriate given way this world and its cardboard cut-out characters ultimately work.

Puzzles are mostly fair and not too convoluted within the usual standards of the genre. Meaning of course you have to expect some instances of things working only in somewhat more complicated ways than in the real world, but nothing too absurd. The game world, restricting the player to the corridors and rooms of the hotel, is compact enough to keep things manageable.

Graphics, although they serve no function as already mentioned, look quite good. The only unfortunate choice being the exact same illustration being used for all rooms. Although this is actually not completely unrealistic for a hotel, the game's failure to give each room its own visual identity doesn't help intuitive orientation.

Overall, Crime Time is a nice little game. Its tight scope and clear, mundane goals make for a refreshing diversion within the mystery genre which all too often oozes high-handedness. It may offer no moments of greatness, but it also manages to stay clear of frustrating or laughable ones. So if you've already played through the well-known classics and want more, why not consider this one?