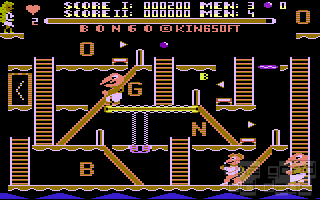 You loved Donkey Kong, didn't you? Sure, everybody did! What about all those imitations? Eh, so-so, overall. Many aren't that playable and some which tried extending the gameplay actually destroyed what made in fun in the first place. Let's see about Bongo.

Bongo is a mouse superhero. A rather materialistic princess, naturally located in the top-left corner of the screen, would like her diamonds back. An evil sorcerer's henchmen are trying to prevent that. Anything works as a rationale to run & jump across platforms, right?

The diamonds appear one-by-one at a random location of the screen. Getting there, you usually would have to walk through enemies, contact with whom means losing a life instantly. At least they are not armed, so no barrels to avoid. So what you have to do is use the specifities of the level to sneak around them. Ladders and slides are fairly straightforward. Trampolins and lifts only catapult/lift you one way. Teleporters are even more powerful, but also maybe a little less predictable. Not all these conveniences can actually be used by the enemies, but then, they are able to jump across short chasms, which Bongo just cannot.

The levels are pretty well defined. Each is only one screen big and the layouts are quite tricky. Because they are so compact, enemies are always close, keeping you on your toes. They even act fairly smart at times and try to predict where the player will move to instead of just homing in on him. Letters floating around provide bonus points if collected. Difficulty is adjustable is different ways (amount and speed of enemies). The only downside is really that there are only very few levels – a whole 6. This is somewhat formally rectified by the existence of a level editor. Though let's be honest: the likelihood that somebody still takes the time to sit down and create new levels for such a minor game these days is practically non-existent. Oh well, the existing ones are fun enough.

A word on the port: On the C16, the protagonist received a less Mario-like appearance and everything generally looks much more attractive than in the older versions. For once, this underappreciated system actually didn't get a stripped down, but rather a superior port! 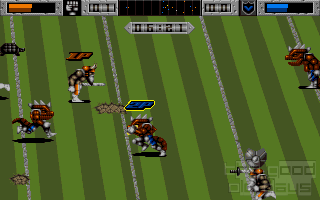