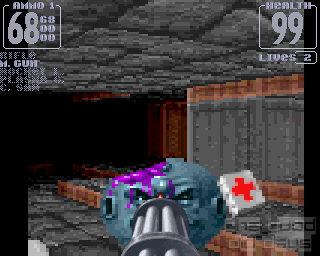 Just for once, you are not fighting aliens and demons on a space station. You're not even a space marine! Rather, Fears manages to do the unthinkable and applies a different theme to the (by then) old 3D shooter formula: some Frankenstein-type madman has created a horde of genetically engineered mutants. Which nevertheless you have to shoot and which will try to shoot you, but still, props for this mild variation!

In fact, apart from visuals, enemies unfortunately all behave the same way. They all shuffle slowly at the player and they all have an incredibly accurate aim (needless to say, they are all of the shooting type). Unlike the monsters, the player also has two close range weapons available and the rest uses different kinds of ammunition, which certainly offers welcome variation.

It doesn't even go straight downhill from there. The game features full-screen graphics of reasonable level of detail at reasonable speed. Though graphics are indeed where the issues start showing their ugly heads. The graphical performance comes at the expense of visual range, which is abysmal. Although the game does feature different height levels, connected by stairways, you cannot look up or down. Often, you cannot even see whether there are stairs leading down or whether it is indeed an abyss you are staring into (or rather: straight over). Of course, this game is full of small ledges you have to tip-toe across, half of the time blindly. And if everything fails (i.e. constantly), the game simply forces its player to take leaps of faith.

Which, all too often, end up in streams of lava, acid and the like. Which also look fairly good, but from which there never is any escape; no lift, no stairs saving your life after considerable loss of health. So all you can do is wait until you die. Which isn't a lot of fun to begin with, but when the game even places bonus items, such as new weapons or ammunition, right inside such death traps, it is really just mocking its player.

The addition of a level editor which works pretty intuitively based on coloured tiles certainly is welcome. In theory, it would be possible to design some levels which would sort of work around the visibility issues. Though very likely, those would turn out relatively bland, and it certainly would not make the monsters any less deadly. The latter could be mitigated by playing against a friend in two-player mode, which works only via null-modem cable and only in deathmatch mode (no cooperation).

Though at some point, you will have to admit that it just isn't worth the effort. Creating your own levels, finding another player and putting two Amigas in one room, just to work around issues which shouldn't be there in the first place, and which other games managed to avoid easily? No, sorry.

P.S. The German release, published by attic, allegedly contains some graphical censoring, accounting for the risky legal grounds such “killer games” stood on at the time, though on the surface, I couldn't spot any significant difference. 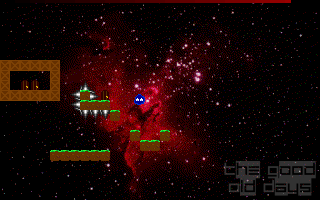