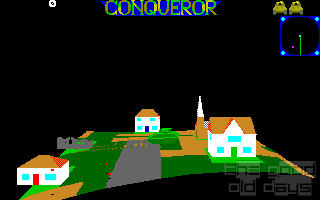 Whenever there is some impressive new technology and a game which uses it to some commercially viable effect, follow-ups are inevitable. Virus had some playability issues, but certainly, it did open new perspectives for gameplay and graphical display of procedurally generated patchwork landscapes. Conqueror takes this back to the ground and puts its player into WW2 tanks.

The game offers different gameplay modes. The central one just has you driving around and shooting enemy tanks until you either destroy them all or you are destroyed yourself. On top of that, you can also add some basic strategical planning, moving around tanks on a map and giving them general commands while you only control your own. This is sometimes coupled with specific mission goals, like defending a position. That whole part remains entirely optional and success is still mostly governed by arcade-type player skills.

With the grounded vehicle, the control scheme is of course fundamentally changed. The two tracks can be controlled individually. Both forward will make your tank go straight, just one forward will result in a light curve, one forward and the other one backward does a sharp turn and so on. Either four keys can be used for that or even two joysticks. In addition, the turret can also be turned independently and the gun's angle adjusted (either with the keyboard or the mouse). Many things to do and too few hands available, you may think, and you would be right. As a workaround, the game allows part of the controls to be taken over by the computer automatically. I.e. the AI will take over the shooting for you or even the driving. Viable workarounds technically, though they don't make a whole lot of sense from a gameplay point of view. So really, there is no alternative to mastering the full controls.

Jumping this hurdle, Conqueror is reasonably fun for some time. Though it will become apparent how limited the concept really is. You drive around and shoot tanks, with little finesse. Height levels, buildings and ground type play some minor tactical roles. Though the viewpoint is really much too close and the radar is useless. The colour palette is less than ideal, too, with the tanks being either the same green as grass or the yellowy-green of other plains.

With Virus, my complaint is that it is too hard to handle for me, though I do admire it on many levels. Conqueror is also hard, but that is not its main issue. The strong impression is that its potential is exhausted as it is. 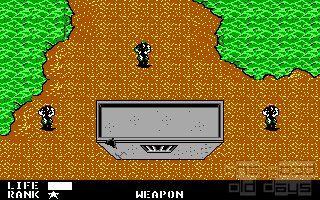