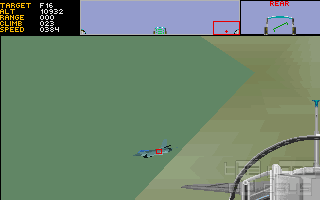 Joystick jocks. You know who you are. If you played Falcon 3.0 in the early 1990s you might be just now looking in the mirror and noticing the fine-white hairs sneaking out of the side of your head. Yes, you are that old and so is Falcon 3.0. But perhaps some of those silver hairs are well-earned from the hundreds of hours of flight time you have logged in your virtual cockpit.

Looking back at the golden years of DOS one could not ignore the many flight sims that have graced the c:\ prompt. From Aces of the Pacific to Red Baron there were many great flight sims that brave souls had accrued countless of flight time. But in my opinion none were more complicated, none more unforgiving, and none more well-documented than Falcon 3.0 by Spectrum Holobyte.

The General Dynamics F-16 is a legendary fighter aircraft. It starred in Iron Eagle (1986) as the main jet fighter that stirred the imaginations of many young pilots, including yours truly. To be able to take control of such an awesome machine was my dream. Falcon 3.0 allows you to experience the Fighting Falcon in great fidelity, especially for a vintage DOS game, ahem, SIMULATION.

Before I get knee-deep in the review, let me say that without a good joystick (flight stick) and a matching throttle control, youâ€™re doing yourself a great disservice if you are playing, ahem, experiencing this flight simulator. Falcon 3.0 can be frustrating with just a simple two-button joystick, so if youâ€™re wanting to delve deeply into an actual simulation then I suggest a good input setup, or HOTAS (Hands-On-Throttle-And-Joystick). There are many other flight simulator from the DOS-era that work well with it, so it is a good investment. Personally I used a Thrustmaster setup with FCS-joystick and WCS-throttle system with a custom profile. I wonâ€™t get into details of how to fly the F-16, how the HUD is setup or the controls, for all that information youâ€™ll want to read through the 250 page manual. Two-Hundred and Fifty. I suggest you start now. Youâ€™ll see me use â€œRTFMâ€ frequently in this review. Read The Freakinâ€™ Manual!

Falcon 3.0 starts with an intro of an F-16 chasing down a MiG-29 just above deck (ground level), with the MiG eventually being shot down. Rat-a-Tat military music shows you into the War Room, the main menu screen of the simulation. Each computer screen of the War Room has different functions. Exiting to DOS, CONFIG for configurations, ACMI for playing of recordings while flying, COMMS, RED FLAG, Squad, and instant action. Let us explore Instant Action first, as that is the noob â€œarcade modeâ€ with you already in the air fully-loaded with unlimited ammo and fuel.

Instant Action places your F-16 behind three large enemy aircraft, ready for the kills. You have a three types of air-to-air missiles, two being AIM-9 heatseekers (short range) and last being the radar-guided the AIM-120. If you donâ€™t know the difference between heatseeking and radar-guided, RTFM. You can take them out by missiles or you can try your luck with the Gun Funnel and use your gun. Using your gun typically takes a lot of hits to down a plane, but getting in from BVR (Beyond Visual Range, RTFM).

Once the enemy planes are shot down, depending upon the skill level set, you probably want to look at your radar and look at any close air-hostiles as well as watch out for any radar sites that are painting you. If this were on ADVANCED skill level you would already be hearing the squawk of your warning system that someone is locking onto you about to shoot where you should be taking evasive action, or even more likely, dead. This can be a very unforgiving simulation on difficult (realistic) modes.

There are numerous targets, both in the air and on the ground, for you to destroy. For ground targets you have bombs, both dumb and guided, as well as the legendary Maverick air-to-ground missile. Nothing is more satisfying than after downing a foe in mid-air combat going after that ground target it was protecting. You pull a hard turn, drop down to the deck and line up the ground target and pull the trigger releasing the 500lb dumb bomb. After you pull away and up away and hit the throttle to get away from the blast. Seeing that bomb hit its target dead-on from the cockpit view is exhilarating! Since Instant Action gives you unlimited ammunition and fuel, you can destroy as many targets as you like until you die. We are still in Instant Action on Beginner Mode though, so donâ€™t get too cocky. Donâ€™t get me wrong, it is a great place to explore the simulation and get familiar with controls, the cockpit and train with unlimited ammo and fuel. The real meat of the simulation is the campaign mode.

We can explore Campaign Mode now that we have our feet wet with the introduction to basic combat in Instant Action. In the campaign you have your own squadron with squad members, missions and the freedom to select what your loadout is on your F-16, as well as what theater of operation. Falcon 3.0â€™s campaign mode allows you to select one of three theaters of operation: Israel, Kuwait, or Panama. This review is only for Falcon 3.0, but from my memory Falcon Gold had at least one other theater of operation in Asia (Fighting Tiger addon).

Thereâ€™s a mission planning screen where you can edit and waypoints on a colored map, read the mission briefing about the details of the area and goals on a computer monitor, edit flights and number of aircraft, pick pilots and finally choose armaments. It is a lot of fun seeing a your F-16â€™s armament change when you pick different loadouts for each plane in your squadron. Nothing like seeing your F-16 turn from an agile fighter loaded with missiles to a flying pig full of 1000lb bombs!

Unlike instant action, when you go to the next screen you will be on a landing strip waiting for take off. This is a full-on minimum 30 minute actual flight! Thankfully you donâ€™t have to use a piddle pack (urine bag) like the real jocks do, as thereâ€™s a pause button and you can even fast-forward the flight. There is an autopilot that will navigate to each waypoint, but donâ€™t expect it to fight for you. Once in the air, raise up your gear (or it will get damaged), and youâ€™re off on a wild adventure!

The cockpit has two modes, a static and a dynamic mode. The static just shows the front HUD and a radar screen, or left and ride cockpit views and a rear view. The dynamic mode is akin to moving your head around so you can track objects. This is an invaluable mode while dogfighting or trying to evade incoming missiles. In the dynamic mode there is a window at the top that shows you where you are looking relative to the front of your aircraft, a very handy viewing system. This is where a top switch hat on a joystick becomes almost a necessity as you are able to quickly switch through different views and cycle through objects. When you are fighting off three bandits and try to dodge that incoming ground-launched SAM missile, youâ€™ll need to be quick! HOTAS is highly suggested so you donâ€™t have to take your hand off the joystick or search the keyboard with your other hand.

The flight model is adequate for an old DOS simulation, and you can set the fidelity from SIMPLIFIED (noob) to HI FIDELITY fidelity (you canâ€™t go up like a rocket loaded with bombs). In fact, you had to have a math-coprocessor for the HiFidelity flight model, or a 486 to Pentium. The enemies can range from insanely stupid to mind-numbingly accurate with their shots. Youâ€™ll need a lot of practice in the cockpit to survive the ADVANCED skill level as the simulation is not forgiving. If a missile explodes even remotely close to you, youâ€™re either dead in the sky or plummeting slowly to earth due to damages. Thankfully the skill levels of the flight model, weapons effectiveness, enemy intelligence, HUD and radar complexity, and numerous other settings can be individually set to give you a customized play to give you the most satisfaction. For example I feel frustrated when I run out of chaff and flares trying to learn how to evade missiles in the campaign on a higher skill set for the SAM (surface-to-air missiles) operators. I can set the simulation so I have limited ammo and fuel, but unlimited chaff and flares, because I still canâ€™t evade missiles like a pro... yet!

As far as the graphics go, they are well-dated. If you wanted a visual treat, this isnâ€™t it. This is classic DOS afterall, but its classic DOS polygons. There are only polygons outside your cockpit from what I could tell. Thereâ€™s no gouraud shading, no bitmap textures on planes or the ground. However, once you get past the graphics this is one of those all-time great simulations. My mind fills-in the graphics because I will be so involved in trying to survive a mission. Just because that MiG-29 doesnâ€™t have the red star on it doesnâ€™t mean it is any less dangerous.

So, is Falcon 3.0 still worth playing? Yes, in my opinion. For me it's part nostalgic, but also part being able to truly appreciate a high-end F-16 simulator that was created back in the days of DOS. It is still very fun and exciting with an adjustable learning curve. It can be as white-knuckled as you want, and a challenge usually keeps people coming back. Having four bogeyâ€™s in the air chasing you down while youâ€™re skirting across the battlefield at 20,000 feet dumping fuel into your afterburner trying to get enough speed to find that convey you need to bomb is intense and greatly satisfying.

Falcon 3.0 will go down as one of those classic simulations. Before buying a copy I suggest finding on Youtube a video called â€œArt of the Killâ€, a video that came with Falcon Gold, which was released later as a CD-ROM compilation of add-ons. It's an hour-long video introduction to basic fighter tactics. The presenter, pilot Pete Bonnani-whose mustache could scare even Chuck Norris into submission, goes over many aspects of aerial dogfights. Its an amazing look into the thinking of a fighter pilot and will help you not only in playing Falcon 3.0, but any other simulator that involves planes... even World War II-era.

So go get your joystick ready, and put on those aviator sunglasses! 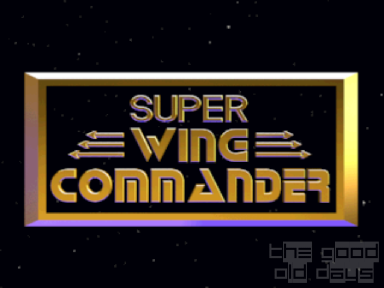