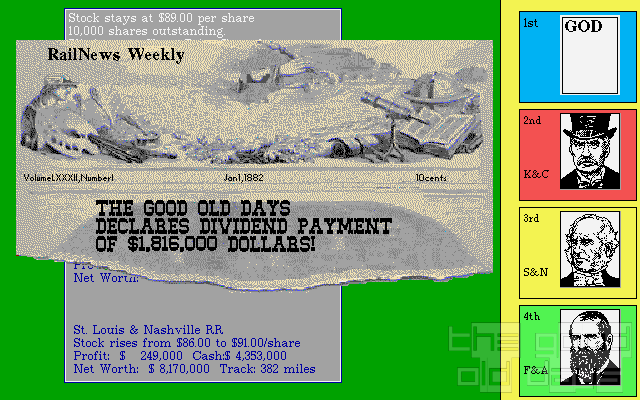 In 1993, Microprose decided to re-release some of their earlier hits as so-called Deluxe editions. Railroad Tycoon, not an old game by any standards at that point, was one to receive such a treatment. As expected, it is almost exclusively a graphical upgrade, and not even a particularly attractive one; although the screen resolution is increased, apart from a couple of digitized photos at special events, the main art is not actually qualitatively improved. The other main change is the inclusion of three new scenarios: North America (in its entirety), South Africa and South America. The latter two being particularly hard scenarios. They come at the expense of the England scenario which does not appear anymore.

That's it. It's regular Railroad Tycoon. Though what is that, exactly? It is, without any doubt, a seminal game which set the standards for the model train / logistics genre until this very day. On the selected map, you use your startup capital to build your first railroad… maybe connecting two towns. Then you buy your first train and put it on the tracks to take passengers or goods back and forth. Delivering the right things to the right places pays some nice money. Hopefully, it pays more than your running expenses, so you're left with some profit which you can then re-invest into expansion of your network.

It is important to remind oneself how revolutionary this concept was handled by this game. Instead of representing the interaction through static pages of numbers, diagrams and menus, gameplay takes place in real time on a somewhat tangible map. A map which intuitively shows landscape types (plains, woods, hills etc.), cities (including their size, without resorting to overlaying a number), natural resources (ore mines, farms…) and industry. A map, on which railway tracks are put directly and where they remain visible throughout, and little locomotives will puff along, pulling different, distinguishable carriages.

There is no (or little) abstraction in this metaphor; player actions have a palpable, lasting effect on the game world. The world being in a constant state of flux even when the player does not act: cities grow, slums develop, mines are exhausted, factories open their doors and so on. Railroad Tycoon simulates a world and shows it in all its (by now "retro", but still working) glory.

In retrospect, 25 years wiser, it is, of course, easy to point out the game's (few) shortcomings. Most strikingly, its restriction to 40 trains and 40 stations per company, which was not lifted even in the Deluxe version, although technology would have clearly allowed for more at the time. Given the size of the maps, not nearly sufficient if you manage to play really successfully.

Then again, maintenance of a large fleet and transport network develops into a bit of an issue anyway. Although there are some functions supporting the player (such as alerts when an engine is getting old and needs to be replaced), picking just the right train from a long, multi-paged list is not exactly trivial. Adapting its route to cater for new needs… phew, the abstracted (there we go, the evil word) route map could really be a bit more useful. Scheduling at most four stops doesn't allow for overly complex routes anyway, but nevertheless, why can't schedules of more than one train be linked automatically? And let's rather not talk about the signalling system which may look good on paper, but really doesn't work well with the train's pathfinding algorithm (which insists on sending trains onto head-on collision course with alarming regularity instead of minding said signals).

The stock market option, trading your own company's and the competition's stocks with the option of takeover, remains more like an afterthought. Although some nice tricks are possible, operation of a controlled company remains rudimentary at best. Take-over of individual stations, handled through so-called "rate-wars" where two companies compete who delivers and tranports most, are really too hard to manage to pull off at a wide range.

Most of these restrictions stem from the technological restrictions of the time. In fact, in comparison with other genre games of the time, Railroad Tycoon provided an extremely comfortable playing experience, thanks to its (mostly) point & click interface working intuitively on the fabled map. In fact, save for the mentioned restrictions, it holds up very well even today, being surprisingly easy to handle while remaining very challenging throughout.

The one thing which is really a pity, though, is that although historical events are reported (appropriate to the selected scenario), they are not reflected in gameplay. For example, approximately 100 years ago, during the period covered in the game, there was a "little event" called the retroactively named First World War. Playing on the European map, newspaper headlines report on the general situation. Though there are no closed borders blocking some of the network, no intentional or collateral destruction of tracks, no state-side requests to support troop or equipment transport. In fact, the game seems to take place in a capitalist dream world where no governments or local authorities passing "restricting" rules exist. The world is in flux, as discussed earlier, but only governed by random simulation processes. Scripted events could have spiced things up in addition, but this opportunity has been missed.

Still, make no mistake: everything criticised is really about ways in which Railroad Tycoon could have been even better. Many of the points only became apparent in hindsight rather than being raised at the time. Even when Deluxe was released, there wasn't really any game out there which had done major improvements on conceptual, graphical or interface aspects. Nevertheless, it is a little sad that Deluxe made no attempt to address any of them. Shortly after this release, however, there was indeed a game which took a larger step forward in all those respects, although to RT's credit, all it offered indeed had been proposed by this earlier game as well. It even came from the same publisher…