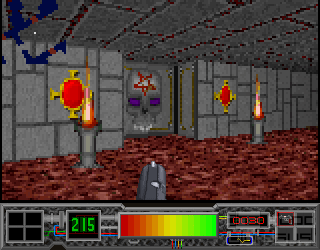 Sometimes, aiming low is the key. Most of the attempts at creating Doom clones on the Amiga had more or less failed. One of the best, relatively speaking, had been Gloom, clearly one of the simplest ones in many respects. Another two years later, the number of active developers on the system had dwindled even further. Testament is even more basic than Gloom. Is that a good or a bad sign?

In fact, what awaits you here is basically Wolfenstein 3D in an occult fantasy setting. Meaning it is a shooter without height levels, without side stepping to avoid enemy fire, with cartoony textures and 2D models which have been drawn only from two or at most three perspectives, so they cannot really be rotated smoothly. Oh well, at least it runs smoothly, even on an unexpanded A1200.

Levels are generally well designed. As usual, progress is governed by up to three coloured keys. Textures (providing indoor as well as outdoor areas) and enemies (ranging from zombies to magicians) are swapped regularly. It's all very solid, with no spikes towards either the positive or negative. Nothing to really remember one way or the other.

What makes Testament an appealing experience is the smooth learning curve. The first levels are still fairly relaxed, with not too many enemies rushing the player at the same time. In fact, it never gets seriously hard all the way to the end. Which may not have appealed to the die-hard fans, but those wouldn't have liked this game anyway.

So, yes, admittedly, this all might sounds quite lukewarm, and that is indeed a way to describe my (lack of) enthusiasm for this game. Nevertheless, it has to be admitted that following the initial premise stated at the beginning of the review, less is more in this case. Testament is really barebones, it provides one of the most basic 3D maze game experiences available. Yet, by this virtue, it does not overextend itself. Playability is pretty good, for those who like this sort of thing. It may have been hopelessly outdated in 1997, but by not even trying to compete, it offers little attack surface to criticise. 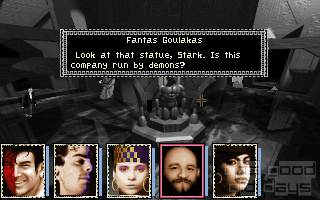