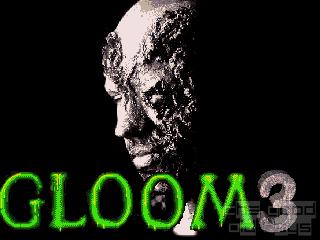 Apparently retroactively counting the Deluxe Edition as Gloom 2, this game came as a bit of a surprise. Is it really the Ultimate Gloom? To get it out right off the bat: no. In fact, having missed it at its original release, it had me wondering upon discovering it whether it had been a professionally made and marketed release at all.

It starts with the broken installer which simply forgets to set an essential assign for the game to work. After fixing this by hand and skipping the sorry excuse for an introductory sequence, the first thing you get to see of the game proper is a wall texture which looks like straight out of a 1980s PD game (those torches!). Monster sprites – which look strangely inconsistent in style, some being only repainted variants of those found in previous games, some being new – aren't much better; to make matters worse, they are basically unanimated, just sliding around instead.

On playability side, they are also extremely tough. Even the very first zombies you encounter (right behind a corner, of course) will easily slaughter you unless you run backwards while shooting. Even then, it may not be enough, depending on your aim. It doesn't get better as the game progresses and losing firepower each time you die doesn't exactly help, either.

Everything in this game just screams "fan mod" (and not even a good one). Maybe this is indeed how it came about. Nevertheless, somebody did decide to publish it commercially. The graphical engine of Deluxe even seems to have been further optimised, running even more smoothly than before. As a release, Gloom 3 is not horrible, as the two preceding games are also there on the CD. Though those are not under review here. Playing this new "game" just isn't fun. At all. It is a sorry sequel which frankly speaking, the world could have done without.