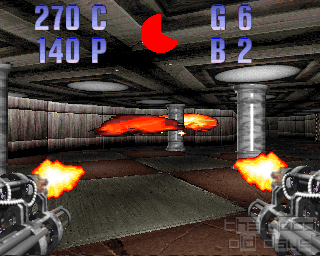 It had to happen some day. Nemac IV did the impossible, after a lot of explicit disappointments and mediocre games, it finally is an Amiga 3D shooter which is good! Far from perfect, true. Limited in many respects, true. But what it does, it does right.

The player takes control of a robot in an underground complex which is mankinds only hope of survival. Through remote control, it has to destroy Nemac IV, a computer with full control of the country's defense systems. Nemac IV believes a test simulation to be the real deal and will launch a “defensive strike” soon if not stopped. And so on and so forth. We have all watched War Games, haven't we?

The game does away with pretty much everything which isn't strictly necessary. Collecting new weapons? No, the robot comes pre-equipped with all of them. All you have to take care of is the supply of suitable ammunition. Ascending or descending corridors, stairs? None to be found. Differently styled wall textures? Not really, everything is metallic grey-ish right through the end. Adaptive lighting? Everything is homogenous per level. Sound? Not up to the best in the genre. Multiplayer? Sorry!

Some of these, like lack of multiplayer or samey textures, may be a pity. Yet, on all counts of actual foundation, the game scores.

Graphics? Apart from variety, pretty good! Starting from a 68020 class machine, the game looks very decent. Even on ECS computers with reduced colours, it is perfectly acceptable. A real 320x256 resolution can be achieved with a very fast 68030 or a 68040, looking quite sharp already. In theory, even higher resolutions are supported, but honestly, this is only playable in an emulator with settings beyond anything physically possible (hence, screenshots don't show such theoretical options). Apart from ECS and AGA, graphics cards are supported as well.

Game mechanics? Instead of blindly going in and shooting everything that moves, Nemac IV accentuates sneaky, tactical behaviour. Maybe shooting the explosive barrel is a better idea than the enemy robot standing close to it directly? Be careful not to stand too close to one such hazard yourself, though. Be careful about different types of enemies as well. Some rely much more strongly on mass assaults whereas others zip around firing so rapidly that it will be hard to follow. And don't even get me started about those floating balls, which will not actively attack, but rather surround you and explode when shot at (taking you down with them) â€“ great idea!

Levels? The player's path is lead by access codes (standing in for the usual coloured key cards of other games) opening certain doors. Some timing challenges (door only opens for a short amount of time) spice things up further. Secret rooms are well-hidden, but usually well worth the effort of finding them as well. Enemy placement is generally fair (their AI could do with some improvement, though): unlike certain other games, you will not be ambushed by large packs right behind a door or a corner, for example.

Controls? The intelligent, customizable keyboard layout allows for walking, running, side-stepping (apparently called “strafing” in genre lingo), firing (also from more than one weapon at the same time)â€¦ after some training, everything works quite efficiently and intuitively. The freely zoomable automap, even showing little icons for objects lying around and indicating the last known location of enemies, is one of the best found in the genre.

Nemac IV certainly won't win any innovation prizes. However, it is excellent craftsmenship. It never aimed too high, which turned out to be the winning formula here. As unbelievable as it sounds, this one isn't just a guilty pleasure (such as the previous genre king on the system, Gloom Deluxe), but actually thrilling fun!

P.S. The Director's Cut, released a year later on CD, adds some additional cut scenes. The game itself is unchanged. 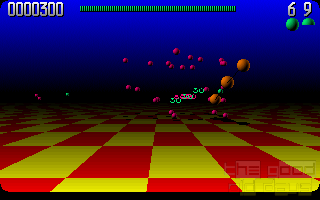