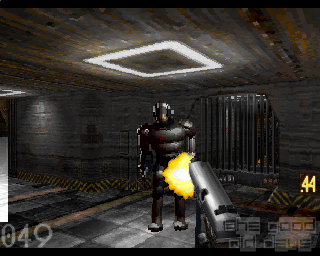 Who was still making commercial games for the Amiga in 1998? Not too surprisingly, Genetic Species sold only about 3 copies worldwide. Though in retrospect, this hardly matters if it's a good game, does it? After all, there was only about one really good 3D shooter on the system before 1998 and looking at screenshots or gameplay videos, this one looks like a real contender for the genre crown.

Indeed, Genetic Species is the best-looking genre entry on this system. Even reducing screen resolution and size while disabling some textures, which is necessary to get the game running smoothly on a mid-range Amiga like mine, it looks quite good. Textures are sharp, corners not too many and perhaps most importantly, the levels' basic looks change with high frequency. Light effects â€“ coming from fired weapons and flickering installations â€“ look more than decent. Explosions are excellent. All this even more so if you've got a high-end machine (68040 or 68060 plus video card).

Gameplay is exactly what you'd expect: stalking three-dimensional mazes, opening doors with coloured key-cards or switches and shooting enemies. The latter are particularly noteworthy: instead of just seeking and attacking the player, Genetic Species' enemies will actually try to outwit him by trying to attack from different angles or going for a tactical retreat if things don't look so good. Pacing playing progress through locked doors, on the other hand, may be a little overdone, with more doors being locked than unlocked by default.

What's nice about them, though, is that they can be of various types. Apart from regular doors, there are also airlocks, large folding gatesâ€¦ most of which doesn't effectively make much of a difference, but it is nevertheless nice to find such varied set design. Which actually can be said about the levels in general, as there are hardly any generic, faceless corridors to be found, but rather “special” sections all around. The only thing missing is really going up and down â€“ levels are completely flat.

As a special selling point, the game promises a Paradroid-like gimmick. The protagonist is able to take over the bodies of any enemy and continue playing as “him”. The advantage being that different beings can use different weapons. The catch being that a take-over only works if the enemy is stunned first, but not dead yet (not a typical state in a 3D shooter, if you think about it). Overall, however, this indeed remains fairly gimmicky.

So far it may indeed sound like this one beats Nemac IV easily. With superior graphics and sound whereas other differences are really just a matter of subjective taste (collecting weapons and keys vs. the simplified concept in Nemac IV), Genetic Species should be the best 3D shooter on the Amiga, right? It comes close. If only there weren't two things.

First, the game does not have any (usable) automapping. It is therefore very easy to get lost in the generally dark surroundings. Second, inventory management gets really annoying all too soon. Only three items (including keys and weapons) can be carried at the same time. If your main gun occupies the first slot, a second one is taken by some grenades and of course, you need your tazer to stun enemies, you will not be able to pick up the red keycard anymore. So now what? Yes, this leads to a lot of backtracking which should really be unnecessary and just slows the action down.

Neither decision is really comprehensible. Is this supposed to add a twisted sort of realism? Then why shouldn't this “BioShifter” with all his abilities not be able to “scan” his surroundings? Why doesn't any of the host bodies have any pockets or a backpack? Why do all items take the same amount of space? No, sorry, it does not make any sense.

For hardcore players, such restrictions may be acceptable. For them, Genetic Species is definitely a recommendable game. Its qualities, both on technical and gameplay sides, are quite apparent. As far as exploration is concerned, it keeps you playing just for the curiosity of what will come next. Raw gameplay, on the other hand, is really plagued by those two conceptual “bugs”. You decide what's more important for you.

Technical notes: released as freeware in 2001, this version runs directly from HD. It lacks the CD audio tracks, but comes fully patched. Simply extract the archive and install the bundled libraries (if needed). Finally, assign GENETICS: to the game directory, e.g. in your startup-sequence: 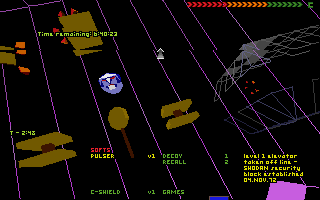