Curse of the Catacombs
for PC (DOS) 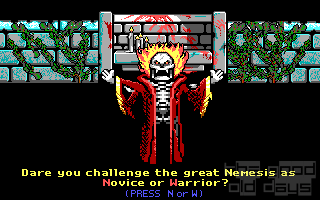 Curse of the Catacombs is a re-release of the game Catacomb Armageddon, developed by Softdisk.

The technology used is an improved Catacombs 3-D engine, basically a slower predecessor of the Wolfenstein 3D engine, with Adlib audio which reminds one of the early Commander Keen games.

The game consists of 16 different levels featuring all kinds of spooky fantasy enemies in different locations.

Playing as a fireball-conjuring mage, you have to make your way through the catacombs, find different coloured keys to pass through previously locked doors and stock up on health potions and power-ups, all while defeating the onslaught of hideous and uncommon kinds of enemies one could expect from a catacomb: zombies, bats, giant ants, living trees but also the common necromancer, basically a robed burning skeleton, in different shapes. Also evil killer rabbits and enemies apparently inspired by Greek mythology are included.

The levels vary from graveyards, gardens, forest to even kind of sci-fi environments in the later levels.

Advanced features include things like objects stopping time for a few seconds. Also, similar to the Wolfenstein 3D series, some walls can be destroyed (rather than pushed) to reveal secret areas, sometimes required to progress to the next level. Equally inspired by Wolfenstein the protagonists face is visible on the bottom of the screen. The face indicates the health of the player, getting more unhealthy-looking the further down your health goes.

All in all an interesting game, especially when looking at the timeline. While the original Catacomb 3-D was released before Wolfenstein 3D, Curse of the Catacombs was released a year after it. Especially when compared to Catacomb 3-D, you can see the way each game influenced the later ones, also some of the improvements from Wolfenstein seem to have been incorporated into this later engine version. Most obviously seen in the user interface design.

troublemind:
Feel free to share anything about Curse of the Catacombs (1993) here!
[Reply] 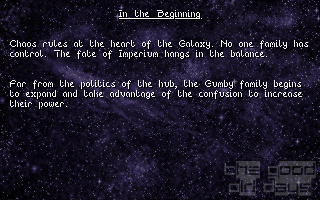