Tintin on the Moon
for PC (DOS) 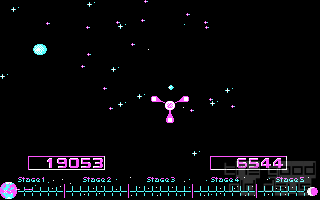 Tintin on the Moon was released in 1989 for various home computer systems by Infogrames (IBM PC, C64, ZX Spectrum, Atari ST, Amstrad CPC and Amiga). The game is divided into 5 stages, alternating between rocket flight stages and platform stages. The PC version offers English, French and German as language options, so do most (or all) other platforms.

In the rocket flight stages you are controlling the rocket, trying to gather fuel and avoiding crashing into rocks.

In the platform stage you play Tintin running around inside the rocket, avoiding enemies, freeing friends and extinguishing fires, sometimes accompanied by Captain Haddock.

The PC version offers Hercules and CGA graphics, and audio is generated from the PC speaker. This makes all other versions for different platforms superior, Amiga offering the subjectively best graphics and audio. There are slight differences between the games on the different platforms, none of them are straight ports but rather redone for each system. There are major differences in graphics and audio, different cutscenes and screens, and minor gameplay differences as well as level design. But the overall gameplay is the same on all platforms.

The game is quite short and can be completed in 15-30 minutes if you know what you are doing. It ends with the rocket successfully landing on the moon, followed by a cutscene, depending on the platform.

On different machines (or DOSBox with custom cycles setting) the PC version can run slower or faster than designed, letting it run slower can be an advantage when you have problems with the rocket stage levels, but apart from that you are probably better of playing the Amiga version or try any other version.

In the end, the game can be fun if you get the hang of it, but it is quite challenging sometimes, short and a bit low on content.

troublemind:
Feel free to share anything about Tintin on the Moon (1989) here!
[Reply] 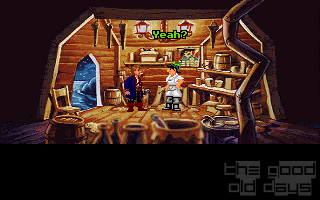