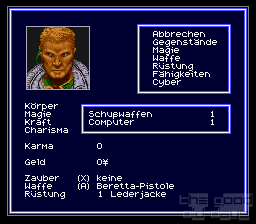 Well, that's the interesting beginning of an uncommon game. Shadowrun is one of the few adventures which are really unique concerning their feeling. During the game, you are drawn into the atmosphere of this gloomy piece of fiction. A world of powerful companies and powerless countries. You are right in the middle of it. Without identity. Everywhere you are threatened by violent mercenaries, but you don't know why they chase you.

To the game itself. The protagonist moves through a dark urban environment which is divided into sections. No dungeons where the hero is followed by some monsters. No kingdom where adventurers are employed with cheap work by the king. No, this world is just about two things: money and power. Money to buy power. Power to get money.

The graphics are not breath-taking. It's just there. What does that mean? It doesn't impress with great effects or this pseudo-3D-mentality typical for SNES. It submits to the atmosphere and the story without withdrawing to the background. You think of the graphics very seldom, and that's an ideal situation that few games were able to fulfill so far.

Another new, but maybe not that positive aspect is that you can do practically everything with one character. At the beginning you can only fight, however you have the possibility to practise magic and browse through cyberspace later. The latter is even necessary to finish the game. But how does that take place?

Fighting and magic are pretty plain. On the character screen, you choose the weapon/the spell and point the cursor on the aim. You can understand this as a technical weakness of the game, as this expensive system easily causes hectic during extensive fights. Extensive fights? Of course, in larger missions you have the possibility to recruit the needed support in different clubs.

In my opinion, the most significant weakness of Shadowrun is the game in cyberspace. Plain 2d fields have to be overcome by Minesweeper-like means, to reach grey data blocks that can be plundered. Money and information can be gained. It's a pity that the applied system is worse than the pen-and-paper original. The fights are practically decided by one single skill with the great name “computer”. A very boring task to surf through the matrix in the long run.

Skills and attributes are developed by KARMA, which you can get after fights. That's all. An example: You want to increase the attribute “body” from 3 to 4. Therefore you seek a comfortable place for sleeping, choose “use Karma” in the displayed menu and distribute 3 Karma points among the attribute, then it's raised to 4. Not very complex, but sufficient.

Now the detailed description may not sound very enthusiastic, but all these things are just serving the purpose. The purpose is fun, and that's GUARANTEED!

Not nearly as good as the SEGA version

Go get that too! 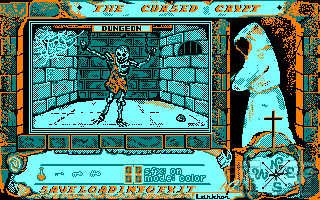